Rothman: The Left and the Press Encouraging the Creation of a Liberal Tea Party 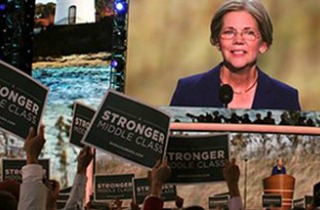 Democrats have justifiably rejoiced in the divisions within the Republican Party which hamper its ability to speak with one voice and act with unity of purpose. The tea party faction within the GOP, once an unalloyed good that propelled the party to electoral victory in 2010, has been more of a headache than a boon ever since. The conservative faction of the Grand Old Party is often credited with robbing the party of electoral victories, torpedoing bipartisan legislative deals, and elevating gaffe-prone voices that force the GOP’s moderates to adopt a perpetual defensive crouch. The temptation for Democrats to partake in a bit of schadenfreude as a result of Republican woes is both understandable and warranted.

But, for all the animosity and friction within the GOP, the tea party has remained a relatively loyal wing of the Republican coalition. The lessons that both establishment and insurgent Republicans have learned after a series of avoidable defeats have been painful, but they are also being internalized. Each strategic blunder and toxic candidate has led the GOP to recognize that the realities of governing and campaigning in a modern media environment require a savvy which has thus far proved elusive. Surely, hurdles remain and the Republican Party will inevitably stumble across landmines yet unforeseen. But the party’s most tumultuous period of internal recalibration has passed. The tea party forced the GOP to evolve to meet the political challenges of Obama’s first term. The Republican establishment, it seems, is starting to impose a bit of pragmatism on the GOP’s idealistic conservative wing in Obama’s second term.

These lessons are lost on Democrats, it would seem, and their media allies are doing the party no favors by ignoring them. Just over the horizon is the rise of a similar factional fight within the party of Jefferson and Jackson. And the political press, while not engaging in outright cheerleading over the ascendency of an insurgent and uncompromising progressive wing within the Democratic Party, has avoided the scolding admonishments of liberal Democrats that it regularly doled out to conservatives.

Quietly and behind the scenes, a war for the soul of the Democratic Party is raging. Taking to the pages of the Wall Street Journal on Monday, two centrist Democrats with the group Third Way chided the progressive wing of the Democratic Party for their lionization of politicians like Sen. Elizabeth Warren (D-MA) and New York City Mayor-elect Bill DeBlasio. These far-left Democrats, elevated to high office by disproportionately left-leaning electorates, have captured the heart of the party’s grassroots. “Nothing would be more disastrous for Democrats,” they write.

Taking aim at both the policies and methods favored by “left-wing populists,” Joe Cowan and Jim Kessler warn that their idealism threatens to stymie necessary reforms that could topple the achievements of Roosevelt, Kennedy, and Johnson. “Liberal populists do not even attempt to address this collision course between the Great Society safety net and the New Frontier investments,” the warn.

On Thursday, New York Times reporter Jonathan Martin chronicled the pushback from the so-called “left-wing populists” and their allies. “[T]he Progressive Change Campaign Committee, and three other liberal advocacy organizations have urged their members to contact a group of congressional Democrats who are honorary leaders of the centrist group, Third Way,” Martin writes.

Moreover, liberals on the Democratic Party’s left have apparently learned the wrong lessons from the rise of the tea party; that tempting the party with the lotus of electoral enthusiasm in order to hijack the agenda and force the party’s ideological trajectory in their direction is a winning strategy.

Liberals have witnessed the success the right has enjoyed in recent years by using such tough tactics. Conservative groups have pushed Republicans to take a harder line, most recently over the federal health care law, and have seen their leverage with officeholders grow.

POLITICO’s Ben White reported on the reaction to Warren’s overwrought and strategically unfocused response to the opinion piece. He quotes a “senior DC Republican” who marveled at her apparently thin-skinned response: “Rather than meet the policy arguments head on in the arena of ideas, Warren chose to fire off an intemperate letter to the CEOs of major financial institutions effectively demanding that they disclose all their corporate contributions to policy wonks and think tanks — implying but not saying that they were stealth underwriters of the op-ed objecting to her own views,” the source wrote.

A bunker mentality, besieged on all sides by enemies, under attack by the insufficiently ideologically committed even from supposed allies. Sound familiar?

The press, for its part, is not helping Democrats by tacitly welcoming the party’s leftward drift. After Warren helped scuttle a bipartisan budget deal that was not to her liking, few in the press scolded the Democratic Party’s left wing for lacking pragmatism and appeasing an uncompromising base.

“Is the center of the Democratic Party being outmaneuvered by the left?” MSNBC anchor Chris Jansing recently asked Democratic strategist and MSNBC personality Angela Rye. “I think the entire party is on the move, Chris,” she replied. That’s one way of putting it.

Had tea party Republicans been the wreckers of a bipartisan deal to, say, reform the country’s immigration system, you could bet they still would not have heard the end of it from the party’s moderates and the commentary class. No such admonition is forthcoming for the activist progressives “on the move.”

In The Atlantic on Friday, the Cambridge, Massachusetts-based writer Michael Zuckerman identifies the internal sociopolitical struggle within the party. Amid a crisis of confidence within Democratic ranks, resulting from the Affordable Care Act’s failure to launch and the public’s rejection of both its aims and means, Zuckerman urges President Barack Obama to get ahead of the party’s ideological struggle and pick a side before outright factionalism evolves from a domestic squabble into a very public dispute.

Obama is the standard-bearer of a party in the midst of a fight over the validity of its philosophical underpinning. (The administration’s Healthcare.gov incompetence has not helped.) With 2014 looming and many of his supporters in retreat (or at least feeling that way), Obama needs to fight the progressive corner. If the country has really come to a point at which a Democratic president won’t defend the basic ideas behind “income redistribution”—something we’ve been doing for over 150 years now—Democrats are soon going to have much bigger problems than a malfunctioning website.

Good advice. No one is better positioned than Obama as the head of the Democratic Party to manage its ideological transition. But that time is rapidly coming to an end as the president’s political capital wanes and he transitions, as do all second term executives, from asset to liability. Leaderless after 2008, the Republican Party’s struggle to reconcile the ideological divide within its own ranks was a messy affair. Democrats appear poised, even eager, to engage in precisely the same process.