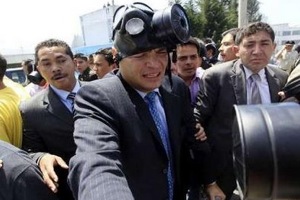 It was a week straight out of a media critic’s dreams, or a surrealist filmmaker’s screenplay: Rahm Emanuel‘s tenancy issues, James O’Keefe‘s “palace of pleasure,” and Rick Sanchez‘s spontaneous combustion. With so much of import going on in the world, makes sense that the media mostly missed the fact that the Ecuadorian police force tear-gassed President Rafael Correa and quarantined him in a hospital as his shouted “kill me! kill me!”

Time does a good job of summarizing the chaos:

“[The Ecuadorian police force] protested a law passed this week to reduce their bonuses and slow their promotion schedules. When Correa, 47, hobbled by recent knee surgery, made his own reckless move and went to Quito’s largest police barracks on Thursday to explain the new civil service law to them — or, as they claim, harangue them — they fired tear gas. At one point a flying object hit Correa, who ripped loose his tie and screamed, “If you want to kill me, kill me!” At that point his aides whisked him to a hospital next door, where his supporters clashed with the rebellious police protesters amidst gunfire, flying rocks and burning-tire barricades. Meanwhile, police and small factions of the military apparently sympathetic to them blocked Quito’s international airport. By the time the army had delivered Correa back to the presidential palace, 88 people were injured and two police officers were dead.

While these events were occurring live last Thursday, most cable networks were focused things higher on their dockets, like White House departures, or new planets, and sometimes just each other. Dubious credit to CNN, who later reported live on a story that would certainly have fallen under the radar otherwise: the presidential ambitions of Senator John Thune of South Dakota.
Sure, there’s an argument to be made that the goings-on in a small, leftist-run Latin American country that now mostly serves as a puppet of the Hugo Chavez Bolivarian empire (which, by the way, suffered major losses in their last election) have little impact on the lives of the average American, but that argument is a slippery slope. If the deterioration of an oil-rich, anti-American coalition only a continent away isn’t of much relevance, who is to say the juvenile plotting of ambush journalism’s pimp-in-chief or the cliched anti-semetic rantings of the guy that reads Twitter to the masses are any more important? Even poor old sun-chapped Sen. Thune is probably more important than O’Keefe, at least to the throngs of people that live in South Dakota. That in a country so relatively close to the United States, after an election that severely weakened Iran’s strongest ally on this hemisphere, the police attempted what appears to be a coup in such dramatic form deserves at least a headline or two somewhere, and certainly some expert analysis (one cannot expect most working Americans to have the time to understand Ecuador’s politics enough to understand why this is important). Maybe next time there’s an attempted coup in Latin America the opposition won’t be silly enough to sandwich it in between the dueling meltdowns of some of America’s favorite people to hate.
[Photo Reuters via Yahoo!]