To Bleep or Not To Bleep? You’ll Never Guess Which Network Won’t Air the Word ‘Schlonged’ 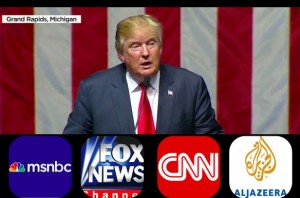 By now you have likely heard that the newest installment of did-he-actually-say-that moments from the candidacy of Donald Trump is perhaps the funniest one of them all. Speaking to a gathered crowd last night in Grand Rapids, Michigan, the GOP frontrunner spoke about Hillary Clinton and said the following:

“She was going to beat [Obama,] she was favored to win, and she got schlonged. She lost, I mean she lost.”

Video of the must-see-it-to-believe-it moment is here:

Let’s just put this in perspective for a quick moment. The man who by all accounts is closest to becoming the next President of the United States — following in the footsteps of Franklin Delano Roosevelt and Thomas Jefferson — cried out that a female competitor got schlonged. The last time I heard the word schlonged was at my all-male high school in New Jersey where some guys have a weird obsession with pranking each other with drawings of male anatomy. I was happy to leave the phrase there ten years ago, though I must admit, I’ve had a hard time not laughing all morning at the absurdity of watching Trump bust it out on the campaign trail.

It marks a weird gray area for members of the media, who today find themselves covering the story but wondering if “schlonged” crosses into a territory of discomfort deserving of a bleep-out. Each network and media outlet has its own style guide complete with a dizzying array of things you can and can not say, but I’m willing to bet that as of this Winter Solstice, “schlonged” does not appear in any of them.

Perhaps the craziest thing is that this isn’t even the first time Trump has been on-record using the word “schlonged”. In 2011 he — get this — referred to a Congressional election in New York much in the same fashion in an interview to The Washington Post:

“I watched a popular Republican woman [Jane Corwin] not only lose but get schlonged by a Democrat [Kathy Hochul] nobody ever heard of for the congressional seat and that was because, simply, because of the Paul Ryan plan.”

It only took 13 minutes for MSNBC’s Morning Joe on Tuesday to introduce the instantly-infamous clip, which came right after airing Trump’s other set of off-the-wall comments about Clinton’s bathroom break as “disgusting”. Seeing Willie Geist‘s motion to present Trump’s sophomoric clip, Mika Brzezinski quickly interjected to Geist, “No no no no schlong! No no no, no. Nope, no.”

Geist instead calmly continued, “We’re gonna put this out there, people who are thinking about voting should know this.” The video clip in question played in its entirety — no bleep-outs, just pure and unedited.

While Joe Scarborough joked, “Is that Yiddish?,” Brzezinksi was far less amused, admitting it was a comment, “we shouldn’t show.”

Kasie Hunt presented the clip again on MSNBC in the 10 a.m. ET hour — and although she referred to it as “vulgar language” — “schlonged” again went unedited.

Over on CNN, New Day host Chris Cuomo also rolled the clip shortly after 7:30 a.m. and declared to his guests, “Schlonged was the word he used!”. On the topic, one of those guests — Jeffrey Lord — went on to say, “Well you know Hillary Clinton is married to Bill and we all know the episodes there… I don’t even want to repeat on air what was done in the little room adjacent to the Oval Office.” While everyone on the set of New Day expressed immediate disapproval of the commentary, I think I can only describe the childish Lord in a way that would recycle some of the anatomy-based rhetoric aforementioned.

At 10:24 a.m. ET, a CNN voiceover package identified the phrase as, “an R-rated derogatory term while referring to [Clinton’s] 2008 defeat to Barack Obama.” On-screen, the headline TRUMP USES CRUDE LANGUAGE IN ATTACK ON CLINTON blared out. The clip played unedited.

Al Jazeera America played out the full version at 9:50 a.m. ET.; Your World This Morning on the network also played it earlier in the day at 7:34 a.m. ET.

As the morning went on however, it seems as if one outlet began to question whether or not “schlonged” should be edited while the clip plays on air. At 10:30 a.m. ET, Stuart Varney on Varney & Co. on Fox Business presented the clip with a bleep; the host immediately acknowledged, “We bleeped it out — that was a reference to a male anatomy, OK? We bleeped it out.” Varney continued to refer to it as a “war on Women” comment.

Fox News also followed suit, as Bill Hemmer on America’s Newsroom rolled the bleeped-clip and said, “We bleeped that because it is unsuitable in some corners.” Seems strangely, dare I say, politically correct for Fox of all networks to acquiesce to not offending viewers.

And as for the morning show Fox & Friends? Well, they seemed to have skipped the segment all together during Elisabeth Hasselbeck‘s final day, presumably because the linguist Trump himself phoned in for a live interview. They did however focus heavily on the ongoing Trump-Clinton battle of assumed ISIS propaganda, but nothing on the schlong shot heard ’round the world.
[images via Twitter and screengrab]
—