Trump, Charlottesville, and the Fragility of His White Nationalist Base
Opinion

Trump, Charlottesville, and the Fragility of His White Nationalist Base 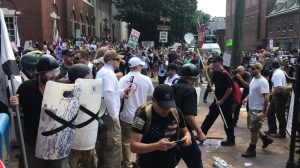 Over the weekend, events at the University of Virginia took a dark turn as a mass of torch-wielding white nationalists, rallying to “take back their country” from the minorities and women and LGBT Americans who apparently oppress them just by existing, unsurprisingly became violent.

As of Monday, footage of a group of white males beating an African-American male with poles and a number of other violent confrontations is circulating around the internet.

There are a lot of valid questions being asked in the aftermath of this weekend. Many of the answers, of course, could be found in taking a long hard look at today’s political climate, one in which the current president was endorsed by the Ku Klux Klan, and encouraged violence throughout the campaign trail and recently suggested law enforcement take up violence as well.

And, of course, this is the president who ran on the slogan of making America great again, a promise that is only relatable and applicable to heterosexual white males, since anyone with the most basic knowledge of U.S. history knows that it is paved with the violent oppression of literally every other group.

But ultimately, one question rises above all others — considering their reaction to lives of undeniable privilege, how would these rabidly angry, heterosexual, polo-clad white males respond if they had actually faced any real, identity-based oppression in their lives?

They’re quick to lash out against “liberal snowflakes,” who are generally women who speak up about being slut-shamed or denied crucial health care, African Americans who speak up about racially charged policing, members of the LGBT community who speak up about laws allowing them to legally be discriminated against, and rape survivors who ask for trigger warnings and safe spaces. But now, despite taking to the streets to speak up about oppression they think they face, they’re unable to recognize their own hypocrisy.

White nationalists are outraged by people who so much as take to social media to express an opinion, but are unable to recognize their own fragility in leading a march to complain about the great oppression that is having to share America with people they believe are inferior to them.

They find it oppressive that in today’s national dialogue, annoying “social justice warriors,” “libtards” and “sluts” and “whores” and “fags” and everyone who isn’t a straight white male now has the platform to talk about the oppression they face.

And ultimately, they find it degrading that it’s no longer the 1950s and they no longer have every single opportunity in the country bestowed upon them, either due to their own mediocrity and shortcomings, or to modern laws that have the audacity to give women and minorities a seat at the table.

That’s the extent of the hypersensitivity and sense of entitlement of white nationalists.

But how did it get like this? How did this group of rabidly angry white nationalists get so big and, more importantly, so rabidly angry? As David Duke suggested when he claimed the protest reflected “why we voted for Donald Trump,” white nationalists are emboldened and feel their actions are more or less ordained by the fact that Trump was elected. It certainly doesn’t help that the president, unlike nearly all Republicans and his own wife, can’t straightforwardly disavow them.

But in either case, Trump’s hostility to people of color, women’s rights, and more recently, the LGBT community, isn’t the only tendency of his that the white nationalist wing of his base is mirroring.

Just as the president is quick to lash out at all perceived slights and portray himself as a victim — a victim of the “fake news” media, of liberal bias, of disrespect from “the establishment” — the straight, able-bodied white male nationalists of his base, who have never had to deal with being told to “go back to their countries,” who have never been called offensive names, who have never had to experience so much that women, the LGBTQ community, and people of color experience every day, have internalized the president’s “snowflake” ways.

Trump is not a victim. He was born to massive wealth, to never face the discrimination and oppression known to women, people of color, the LGBT community, and low-income Americans, but to often perpetuate it through well-documented discriminatory business practices. And today, wielding so much power to do good, instead, his policies and rhetoric continue that oppression in surplus.