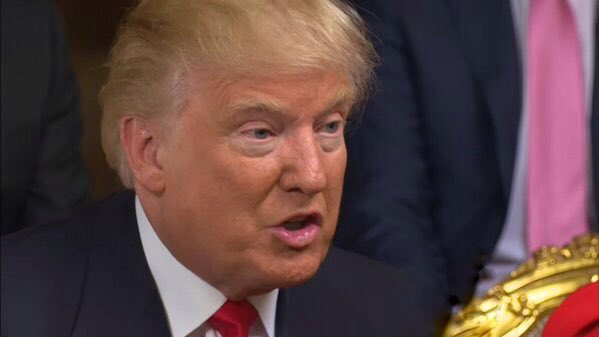 In President Donald Trump’s Saturday night Twitter rant, he referred to Kim Jong Un as “short and fat,” attacked the “haters and fools” who question his coziness to Vladimir Putin, claimed China is “upping the sanctions” on North Korea — without providing evidence — and slammed Hillary Clinton and Barack Obama for their relationships with Russia.

“Why would Kim Jong-un insult me by calling me “old,” when I would NEVER call him “short and fat?” Oh well, I try so hard to be his friend – and maybe someday that will happen!” Said the president — capping off his six part tweetstorm tonight.

Why would Kim Jong-un insult me by calling me “old,” when I would NEVER call him “short and fat?” Oh well, I try so hard to be his friend – and maybe someday that will happen!

Does the Fake News Media remember when Crooked Hillary Clinton, as Secretary of State, was begging Russia to be our friend with the misspelled reset button? Obama tried also, but he had zero chemistry with Putin.

When will all the haters and fools out there realize that having a good relationship with Russia is a good thing, not a bad thing. There always playing politics – bad for our country. I want to solve North Korea, Syria, Ukraine, terrorism, and Russia can greatly help!

President Xi of China has stated that he is upping the sanctions against #NoKo. Said he wants them to denuclearize. Progress is being made.

Between all of Trump’s hot air against his critics in the press, foreign opponents, and predecessor, he actually announced a major change in Chinese policy by suggesting President Xi Jinping is now willing to implement harsh sanctions on the DPRK. However, despite the president’s tweet, China has not implemented any new sanctions, nor has the communist country announced plans to do so.

Trump — who is currently tweeting from in Vietnam while on his 12-day trip throughout Asia — took time out of his day to mock Clinton for accidentally misspelling “Reset Button” in Russian and instead writing “Overcharge” in 2009.