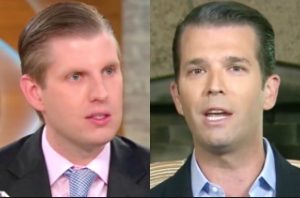 Donald Trump‘s adult sons are apparently behind a new nonprofit organization that’s offering access to the president elect – if you’re willing to pay up.

The Center for Public Integrity reports that Donald Trump Jr. and Eric Trump are board members for the Texas-based Opening Day Foundation, which will be holding an event in D.C. on the day after Trump’s inauguration ceremony. In the meantime, Opening Day is accepting donations that will go to unnamed “conservation” charities, and big donors will be rewarded with some high-value prizes.

According to a brochure published by TMZ, the organization’s biggest donors will be able to snag rewards like inauguration tickets, autographed guitars, and hunting trips with the president-elect’s children. The package offers go up to $1 million and the high-level perks include access to a “private reception and photo opportunity” with Trump.

Walter Kinzie, CEO of event management company Encore Live, confirmed that the nonprofit hired his company to oversee their event, though he pushed back on the accuracy of the brochure and the involvement of Trump’s family.

President-elect Trump has been under scrutiny for reportedly having his children on his transition team, as well as other conflicts of interest concerns regarding his business empire. The Washington Examiner noted that nonprofit organizations are not required to identify their contributors, so this development may create similar intrigue.

“The Opening Day event and details that have been reported are merely initial concepts that have not been approved or pursued by the Trump family. Donald Trump Jr. and Eric Trump are avid outdoorsman and supporters of conservation efforts, which align with the goals of this event, however they are not involved in any capacity.”