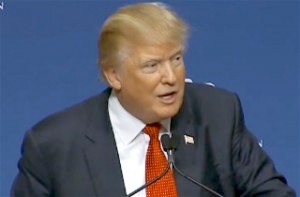 ‘Twas the night before Christmas and all over the net, every person was joyous and getting things set to spend lots of time with the people they love and take just one day to not push and shove or fight or panic or be burdened with fear, because Christmas is a time for naught but good cheer.

But Donald the Trump has a few bones to pick with the losers and haters that make him quite sick. For you see, Mr. Trump is a quite famous troll, and on this Christmas Eve, he’s been on kind of a roll.

Case in point, poor dear Jeb, a Bush nonetheless, is having… well, not quite the greatest success. His numbers have dropped, he’s losing to a clown, and he’s trying to nuke Trump while on the way down.

Last week, the debate, what had happened, they say, is Jeb’s balls grew three whole sizes that day. He said Trump was CHAOS and dangerous too. Trump’s response: you’re a washed-up old loser, boo hoo.

And when Donald the Trump saw the Jeb Super PAC use that exchange to go on quite the attack, he really let loose on the poor fate of Jeb and how his campaign does nothing but ebb:

Poor @JebBush spent $50 million on his campaign, I spent almost nothing. He's bottom (and gone), I'm top (by a lot). That's what U.S. needs!

In the ridiculous @JebBush ad about me, Jeb is speaking to me during the debate, but doesn't allow my answer, which destroys him – SO SAD!

Wow, even lowly Rand Paul has just past @JebBush in the new @CNN Poll. Jeb is at 3%, I'm at 39%. Stop throwing your money down the drain!

But, yes, don’t forget the great HORRIBLE press. For the crime of trying to get Trump to address all the mad crazy things he’s said on the trail. But it doesn’t hurt Trump. He does nothing but prevail.

So he sniped at the press. So dishonest!, he boasted. The only thing missing is a pithy BOOM ROASTED!:

Third rate reporters Amy Chozick and Maggie Haberman of the failing @nytimes are totally in the Hillary circle of bias. Think about Bill!

Why isn't @chucktodd using the much newer @CNN Poll when discussing how well I am doing instead of the older Q Poll? CNN even better!

.@meetthepress and @chucktodd very dishonest in not showing the new @CNN Poll where I am at 39%, 21points higher than Cruz. Be honest Chuck!

And because… well, why not, he pushed a little hintin’ about his chances next year against Hillary Clinton:

Next year will be an interesting one. I look forward to running against Hillary Clinton, a totally flawed candidate, and beating her soundly

And because it’s the biggest damn trick in his bag, he took a brief moment to tweet out a brag:

Wow, because of the pressure put on by me, ICE TO LAUNCH LARGE SCALE DEPORTATION RAIDS. It's about time!

So I say to you all when you’ve gone and retired: Merry Christmas to all and to all, you’re fired.