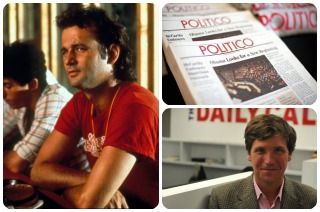 The fallout from Wednesday’s breach of decorum in which Daily Caller intern Gabe Finger inappropriately stood up and asked White House Press Sec. Jay Carney a question continues. On Thursday, speaking to FishbowlDC, Daily Caller co-founder Tucker Carlson blasted the reporters and media outlets, POLITICO in particular, who expressed shock over the impertinent intern and the substance of his question to Carney. In response to POLITICO reporters disparaging the Daily Caller on Twitter yesterday, Carlson called the site “a liberal blog” and “the rich kids’ camp in Meatballs.”

The war of words between The Daily Caller and POLITICO exploded after a DC intern managed to ask a question of Carney at Wednesday’s daily press briefing.

“The Daily Caller is not a “blog” any more than Politico is a “a liberal blog based in Virginia,” which is what Daily Caller‘s Editor-in-Chief Tucker Carlson calls it,” reads FishbowlDC’s interview with Carlson.

He referred to POLITICO as “the rich kids’ camp in Meatballs” and explained, “They’ve spent tens of millions of dollars, they have hundreds of employees and they’re still losing. They’re looking down their noses at us and chortling, but in the end we’re going to crush them in the hot dog eating contest.”

“Here’s our journalism strategy: We try to ask questions, that’s kind of what we do. That’s our top secret strategy for reporting,” Carlson added. “In the end, we’re beating them because we’re doing traditional journalism and they’re not.”

Read the interview via FishbowlDC