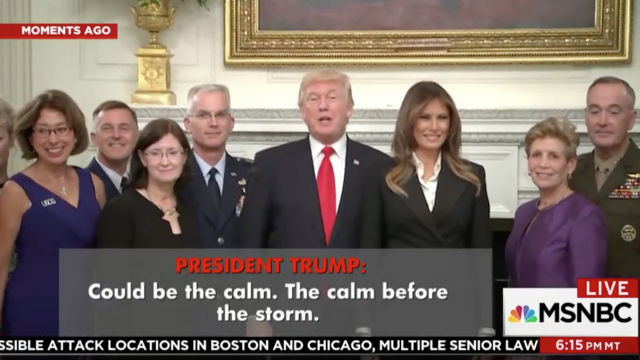 President Trump made a comment earlier tonight during a photo op with military leaders about “the calm before the storm.”

The President didn’t really elaborate on his cryptic remark, and Twitter was just a teensy bit alarmed by this:

A reassuring note from our Commander in Chief. https://t.co/U5Fxq6UQev

Hopefully he is referring to a forthcoming Twitter storm https://t.co/QkT7SBblav

He is just not equipped to be in that office, and anyone who retains the ability to perceive reality knows it. https://t.co/dpCEDGGfAA

Just so everybody is aware, this has been “the calm.” https://t.co/RIg0r1E60H

He said this surrounded by military commanders. https://t.co/UToTnvNtfN

Are we having fun yet? *Takes a shot of whisky* https://t.co/7Kmkt73Hbb

"… after this commercial break." https://t.co/l5lSTdheSG

What is the Commander in Chief of largest military in the world intending to say here? https://t.co/hJ4SObiA6O

“Tune in next week,” the president said “for the next exciting episode of ‘The White House.’” https://t.co/RIg0r1VHph

Trump said this at a gathering of his military commanders. So we start bombing Friday at 5? :/ https://t.co/WDc8E9bs6I

Well this is terrifying https://t.co/6BQHCqvexA

Wait, THIS is the calm? https://t.co/MTAnOnsAwE

A pool report no one knows whether to take seriously or literally: pic.twitter.com/8vnZDqPHQZ

Not a joke, safe to assume North Korea, Iran, Syria, etc are obligated to take this seriously. All we can do is hope they do not over-react. https://t.co/iv6HGca975