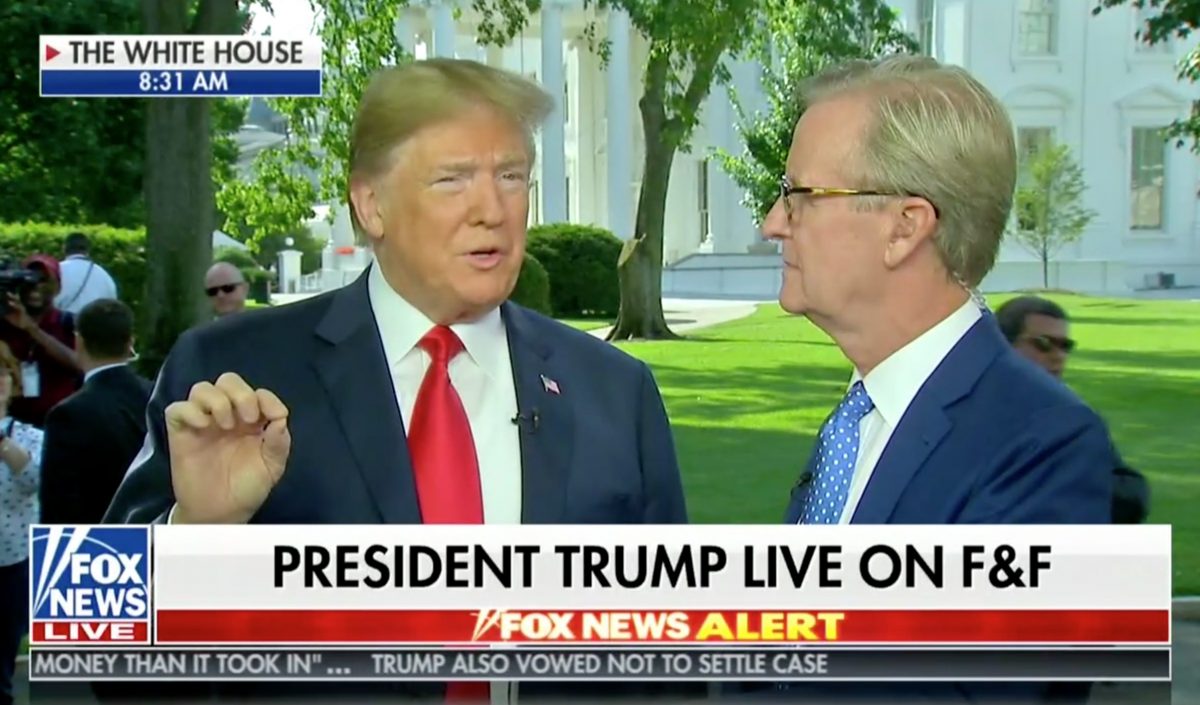 President Donald Trump wandered onto the White House lawn this morning for an announced “unannounced visit” to his favorite morning show Fox & Friends, which caused some of the most insane Trumpian comments in recent memory and triggered a collective sigh from Twitter.

“Wow, the highest rated (by far) morning show, @foxandfriends, is on the Front Lawn of the White House,” Trump tweeted early this AM. “Maybe I’ll have to take an unannounced trip down to see them?”

While filming at 1600 Pennsylvania Avenue, Fox & Friends host Steve Doocy spoke with the president on topics like his budding bromance with Kim Jong Un, who Trump praised and voiced a desire to have “my people” treat him like the North Koreans treat their murderous dictator. The president continued his tirade by calling leaders in the FBI “scum,” suggesting that James Comey should be put behind bars, and slamming the recent controversial IG report as a “horror show.”

Predictably, every semi-reasonable pundit, journalist, and Twitter personality watching the shitshow transpire responded with outrage — particularly over Trump’s desire to be like Kim — as well as fact checks and admission that we really do live in the “dumbest possible timeline.” See a few of the best reactions below:

This is one of the sickest things ever said by an American president. It is no different than Trump saying he wants to be feared by Americans as Stalin, Mussolini or Hitler were by their populations. https://t.co/6bUMQwRFcj

Let’s take Trump’s “sit up” statement in the most favorable light for him. Let’s say he was merely talking about his immediate staff.

It’s still utterly goddamn egregious ball-washing of a violent dictator who kills his family, staff, and people for sport.

Dear @realDonaldTrump: You know what makes America great? Not only do Americans not need to sit at attention when you speak, we don’t even have to come to your parties. #MAGA https://t.co/i1e1lPIgZG

Let’s not call @realDonaldTrump delusional or out of his mind. He knows exactly what he’s doing. He’s scamming Americans.

The Circle is Complete: Trump openly demands he be loved & respected like a North Korean Dictator … or else. He is delusional & Democracy is in danger. https://t.co/ZsfnyRkOot

Trump repeatedly said yesterday’s IG report shows there was was “no collusion” on Russia. It did no such thing, obviously.

Trump’s campaign chair may be sent to jail today does that have anything to do with Trump holding this unusual roving press conference in the front yard? pic.twitter.com/tuV2yOEmjc

Listen,I have zero tolerance for pseudo Republicans in my feed who think is is a fine “joke.” Because I know and you know you’d be losing your ever-loving mind if a Democrat said it. Sorry my politics don’t change like that. If you can’t handle it, unfollow.

Someone (can’t remember who) said during the election that Trump was running to be POTUS because he wanted people to stand when he walked into a room https://t.co/9vsO5Yrhm8

Ha ha ha ha because Kim had them murdered https://t.co/KNKwDaczoT

I need to go bleach out my brain.

Just to be clear. Kim Jong Un is a dictator and a murderer. That’s why his people “sit to attention.” https://t.co/2KAyoBoWZ8

Wishing for a brutal communist regime that compels people to praise a leader, to own the libs. https://t.co/PyG0SoT74T

We are on the dumbest possible timeline