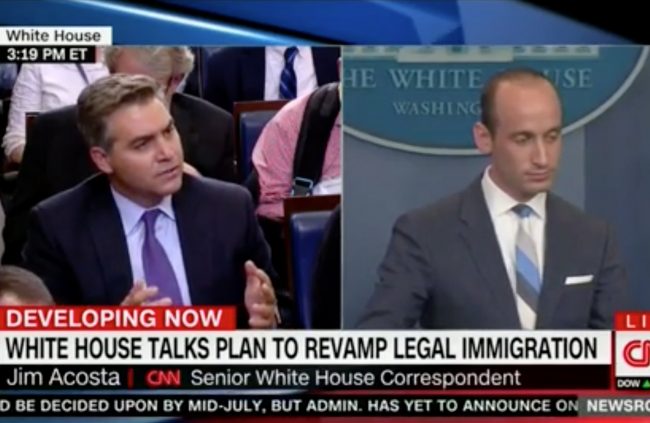 Acosta, in the briefing, said of the administration’s immigration policy, “It just sounds like you’re trying to engineer the racial and ethnic flow of people into this country.”

And Miller fired back by saying, “That is one of the most outrageous, ignorant, insulting, and foolish things you’ve ever said.”

Twitter had lots to say about the heated battle, with reaction largely falling along partisan lines. Here’s a sampling of those who thought Acosta got the better of the exchange:

Kudos to @Acosta and @AprilDRyan for taking on Stephen Miller today.

Credit to @Acosta for keeping it together.

Stephen Miller to reporter: “This reveals your amazing cosmopolitan bias to an amazing degree….”
Miller’s from Santa Monica, went to Duke. pic.twitter.com/xMdvwls4La

Stephen Miller and Jim Acosta arguing about Emma Lazarus and the Statue of Liberty. This is how the world ends.

Stephen Miller calling Jim Acosta “ignorant” is something else

And here are a few Tweets from those who thought Miller got the best of the dialogue:

You mean to tell me CNN’s @acosta is preening in front of the cameras like an idiot? I’m shocked. https://t.co/YQvqKHjWmG

According to my timeline, Jim Acosta thinks the Statue of Liberty decides immigration laws.

Miller was quite good at pointing out Acosta’s “cosmopolitan” bias ? https://t.co/HuN9WO5Uw0

.@Acosta an advocate for a political point of view, not as a neutral reporter. He’s not even playing the devil’s advocate. This is bias.

Love how Stephen Miller is giving @Acosta a lesson in history while keeping him straight!! #MAGA #ChooChoo pic.twitter.com/joHKGc0cPQ

My advice for @acosta is to learn something about an issue before talking about it, but what do I know

What just happened! We hit a new low today! Lawd!