Watch: The Most Important Part of the Ted Cruz Quasi-Filibuster 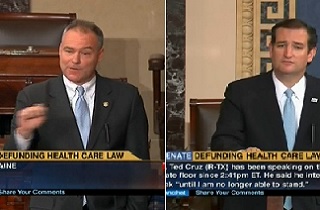 Nazis, Green Eggs and Ham, and Darth Vader are all very entertaining, and even illustrative, aspects of Senator Ted Cruz‘s (R-TX) non-filibuster of a bill that would de-fund Obamacare, but the most important part of the Cruz opus is getting precious little attention. Late Tuesday night, Senator Tim Kaine (D-VA) asked Cruz a question that resulted in Cruz giving the best sales pitch yet for the Affordable Care Act, and its hated individual mandate.

The coverage of the Affordable Care Act has become characterized by the use of the term “deeply unpopular,” but the fact is that almost every part of Obamacare is extremely popular, with the notable exception of the individual mandate. That provision alone appears to be dragging down support for the overall law, but without that provision, the law’s most wildly popular provision cannot exist. The Affordable Care Act prohibits insurance companies from discriminating against people who have a preexisting condition, a clause which less than 1% of Americans say they want repealed.

The other 99% must not be aware that this provision cannot exist without the individual mandate, or some other form of universal enrollment, like single payer. Luckily, Ted Cruz was there to explain it all last night. Senator Kaine asked Cruz, “Prior to the passage of the Affordable Care Act, it was completely lawful and, in fact, common for insurance companies to turn down individuals for insurance because of preexisting health conditions. I do not think–but I want to make sure about this–I do not think the Senator was arguing that we should go back to that day and that we should go back to a status quo where children would be turned down for health insurance because of preexisting health care conditions.”

Let me point out that preexisting conditions and the individual mandate of ObamaCare are integrally connected because the way the insurance market works–let me take an example that does not deal with health care. Let’s talk about fire insurance, fire insurance on your home.

I suspect both our homes have fire insurance. Imagine if Congress were to pass a law that says fire insurance companies cannot take into account preexisting conditions, such as whether the home has already burned down in a fire.

Under that rule, the whole insurance regime collapses because the entire basis of insurance is you get people whose homes have not burned down to pay relatively small premiums to create a pool of capital that will be used to compensate–we do not know who, but somebody’s home is going to burn down. If enough people whose homes have not burned down put in money in premiums, there will be a pool to pay for whichever unlucky soul faces their home burning down.

The health insurance market works quite similarly. If the rule is simply that for anyone, regardless of their medical condition, any insurance company has to cover them, no matter what, then the incentive is the same as with fire insurance; that if the Senator and I are healthy, it is, frankly, irrational to get health insurance, if the rule is, if I get sick, then I can get health insurance and they have to cover me. What you end up with is insurance that consists only of people who have sicknesses, who have grave diseases, and that bankrupts every insurance plan. If you have a mandate that you cannot take into account whether someone is already sick before giving them insurance, it means the insurance companies go out of business, and what it leads to is what Majority Leader Reid has argued for–it leads ultimately to single-payer government health insurance.

Kaine went on to ask Cruz to confirm that he favored going back to allowing insurance companies to deny coverage to those with preexisting conditions, and you can read his full answer in the transcript, but the short answer is yes. Cruz, like every other Republican, favors a plan that supposedly make it easier for your insurance never to lapse, but if it does, you are S to the O to the L.

Cruz’s fire insurance analogy is perfect in every way, because while it accurately illustrates the need for universal enrollment, it also exposes the major difference between fire insurance and heath insurance: if you don’t have fire insurance, someone still comes to put out the fire. You don’t die from a lack of fire insurance. Cruz also deserves credit for not trying to lie about it, like Mitt Romney did.

There are other horrible flaws in the Republicans’ fallback insurance reform plan, since they soured on the Obamacare plan they invented, but it is the tension that Cruz pointed out which most boldly illustrates the disconnect that is driving public opinion against the President’s signature legislative achievement. Americans like the preexisting conditions clause more than they don’t like the individual mandate. The media should serve the public by showing Ted Cruz’s perfect explanation of why they can’t have one without the other.