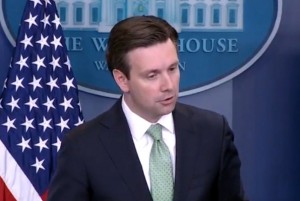 There’s an old expression in politics that goes “When you’re explaining, you’re losing,” but White House Press Secretary Josh Earnest took reporters on a long walk anyway on Monday to explain why it is consistent for President Obama to defend Hillary Clinton’s email practices, while also presiding over an administration that has prosecuted leakers.

During his interview with Fox News Sunday‘s Chris Wallace this weekend, President Obama tried to contextualize the security review of Hillary Clinton’s emails that the FBI is doing by explaining, in shorthand, the problem of “overclassification.” In that interview, the President told Wallace that “what I also know, because I handle a lot of classified information, is that there are — there’s classified, and then there’s classified,” adding that “There’s stuff that is really top secret top secret, and there’s stuff that is being presented to the president or the secretary of state, that you might not want on the transom, or going out over the wire, but is basically stuff that you could get in open source.”

At Monday’s briefing, Earnest was asked why the wiggle room for Clinton, but not for the leakers/”whistleblowers” who have been prosecuted during President Obama’s term? Earnest began by reminding reporters that none of the emails reported on thus far were marked classified when they were sent, which is what puts them into the gray area that the President described. He then reminded reporters that, when they’re not uncritically regurgitating political leaks from Republicans, they often complain about the government keeping information classified even after it is widely and publicly reported.

Finally, Earnest pointed out that the decision to prosecute leakers rests with independent prosecutors, not with the President, and that many of the prosecutions in question began under the previous administration. You can watch the full exchange above, via The White House.