WH Press Corps Bristles At Gibbs Accusation That They Are Overexposed

There was a fun 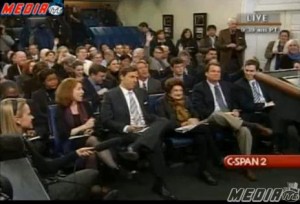 ny bit of back-and-forth at yesterday’s White House press briefing in which Press Secretary Robert Gibbs accused the press corps of having called the President “overexposed,” resulting in some crossfire and several straw polls that indicated, among other things, that I’m one of only 3  White House reporters who want to win the lottery. Beneath the jocularity, however, lies a legitimate media criticism.

Q When is the President going to hold a news conference? Not that you’re inadequate.

MR. GIBBS: Well, I appreciate that. (Laughter.) Chip asked this question on Friday —

Q Yes, but she’ll get an answer. (Laughter.)

MR. GIBBS: Well, she is nicer than you, Chip. (Laughter.)

Q I mean, he’s gone an obscenely long time, not holding one.

MR. GIBBS: But again, not the word “adequate.” (Laughter.)

I don’t see one on the schedule at least in the short term, which is precisely what I said —

Q Is he avoiding us?

MR. GIBBS: No. Again, the last time we had this conversation here about the President’s media strategy I was informed by many of you that the President was overexposed.

Q But you don’t have a good reason for not holding one.

MR. GIBBS: No, we had a whole round of questioning on that.

Q Raise your hand if you do not believe he’s overexposed. (Laughter.)

Q That was very confusingly phrased.

MR. GIBBS: No, that was actually quite well-phrased and one person —

Q And that is not the answer. The answer is accountability.

MR. GIBBS: Right, who wants to win the lottery?

Q Are you saying our chances are just the same?

Q Seriously, one person in this room that said he was overexposed, just one.

Q Just name one person who said he was overexposed.

MR. GIBBS: I will go back and look at the transcript and we can —

Q Well, we have questions about pundits. But we’re not pundits; we’re reporters. There are pundits out there who were saying — (laughter) —

MR. GIBBS: Do you have a question or an opinion, Mr. Pundit?

Missing from the video is Gibbs’ wink at Chip Reid when he said “We’re not pundits.”

Without reviewing the transcripts, I’m pretty sure both Jake Tapper and Gibbs are correct, but I think Gibbs makes a good point. Of course, nobody in the press corps said the President was overexposed (we’re in the asking, not the telling, business), but many of us asked the question. From Gibbs’ point of view, we’re elevating the meme by doing so, hence the wink.

In a way, we are. When the noise from a narrative reaches critical mass, the press starts asking about what “some say,” and theoretically, it should live or die on the strength of Gibbs’ answer and/or the facts. In reality, the media love their narratives, and the effect is usually amplification. The press corps plays a part in that, but it’s not our fault.

Also theoretically, it appears I have a 1 in 3 shot at winning the lottery now. (NY Daily News’ Ken Bazinet and Daily Dose’s Alex Villanueva are the others.)