White Lady Cuts Off Black Professor on Meet the Press: ‘I Get It!’
Opinion
VIDEO

White Lady Cuts Off Black Professor on Meet the Press: ‘I Get It!’ 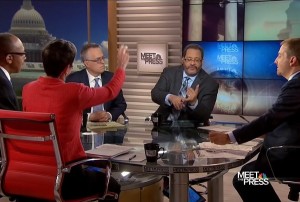 The tensions that have been reignited this past week over police violence, and which play out every day for African Americans in this country even in the smallest of ways, were perfectly illustrated during a panel discussion on Sunday morning’s edition of Meet the Press. The group was discussing the issue of empathy in the wake of this week’s tragedies, which presumptive Democratic presidential nominee Hillary Clinton called on white Americans to express by listening to the experiences of black Americans.

Apparently, Republican strategist Mary Matalin missed that memo, because as soon as Professor Michael Eric Dyson started to share some of those experiences, she put her hand up to try and interrupt him, and when he still managed to finish his thought, she impatiently told him “I get it!”, but really wanted to get back to the point that Republican panelist Michael Gerson, the other white person on the panel, was making:

Prof. Dyson: I spoke with the Black Police League, and those people are remarkable but understand, let me tell you something you don’t want to hear. As black police, they say, too, when I’m out of uniform, I have fear. when I’m not involved directly and people can’t identify me, I have fear. Look at the young woman, Nakia Jones, who did the Facebook posting, we have to continue front.

Matalin: Professor, we got that point, and I want to speak to Mike’s point.

Prof. Dyson: It’s empathy with justice. It’s not just getting it, it’s understanding it.

Matalin: I get it! It starts with empathy, and justice is more frequently done than we’re discussing.

Do you, though? The point Matalin was so desperate to get back to was, as Gerson said earlier, the need for “people in the white community (to) understand that minorities experience our justice system different than we do, and in ways that we would not tolerate.”