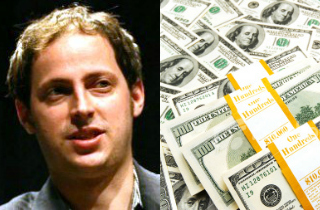 New York Times statistics-based blogger Nate Silver has taken considerable heat (mostly from conservatives) for his prediction that there is a 75-percent probability President Barack Obama is re-elected next week, bucking the popular narrative that this election is largely a horse-race. Despite all the criticism foisted upon the stat geek — most recently for putting a $1,000 wager behind his electoral prediction — I would much rather trust him than any of the usual cable news soothsayers.

A little background: Silver, an admitted 2008 Obama voter, recently became the right’s favorite enemy after he took to his New York Times blog space (an automatic gag-inducer among conservatives) to repeatedly predict, via his special algorithm, that President Obama has a very strong chance of re-election.

His sure-handed predictions have also led to a very public duel with MSNBC host Joe Scarborough, who has called Silver a “joke” and an “ideologue” for thinking the race to be anything but a tossup.

Silver’s response to Scarborough tells you everything you need to know about why the Times writer is likely more trustworthy than most political journalists and Beltway pundits who flaunt their poll fetishes on a daily basis, but are rarely ever accurate in their boastful predictions:

Silver is willing to back up his predictions and hold himself accountable for inaccuracy with a $1,000 wager.

Of course, this sort of gimmick led to predictable outcry over a “journalist” betting on his subjects — even the Times Public Editor Margaret Sullivan criticized the wager as “a bad idea” that serves as ammo for his critics to label him as a “partisan” — but the reality is that when someone in the speculation business is actually willing to put a financial wager behind their soothsaying, they are much more likely to be accurate and trustworthy.

Fox News pundit Dick Morris would undoubtedly never put a wager behind any of his grossly inaccurate (and occasionally irresponsible) predictions. Neither would frequently-wrong neocon Bill Kristol.

That’s because there’s no accountability for the accuracy of their predictions. Whether or not the Morrises and Kristols of the world are wrong about their political picks, they will continue to get airtime as speculative commentators. The perpetual short-term memory loss of the Beltway intelligentsia allows pundits, left and right, to continue being wrong without losing esteem.

But when predictors put their money where their mouths are — as Silver has done — it’s a good way to hold speculators accountable. And their bets are usually very accurate; if not, at least it indicates earnestness on their part.

For proof, look no further than the popular online prediction market, Intrade.com. While so-called “experts” on cable news pontificate on what they think will happen with this or that political event, the bettors on sites like Intrade typically get it right.

While TV pollsters and pundits navel-gazed in 2006, predicting Republicans would keep control of Congress, Intrade’s bettors collectively predicted every single race in the Senate right. In the 2004 presidential race, Intrade predicted every state on the electoral map. In 2008, the betting crowd was only off by one state. One UPenn study found that Intrade’s margin of error was just over half that of major national polls.

Silver’s $1,000 bet reminds me of the wildly more accurate (there are a few exceptions, of course) Intrade market.

Whether or not his predicted outcome for the 2012 election is my preferred outcome does not matter. For one, I don’t actually have a preference; but also because his wager says a lot more about the assuredness of his bet than the partisan pundits who make bank simply telling partisan viewers what they want to hear.

Whether or not it’s what I want to hear, I trust Silver’s Obama pick more solely because he was willing to put a wager behind it. In the vast swamp of prediction “experts,” that seemingly controversial gesture goes a long way.

And if Silver is right about his Obama pick, he will, as the Atlantic‘s Conor Friedersdorf notes, “have the satisfaction of a craftsman who built something that worked, the monetary value of his labor will increase, he’ll be held in higher esteem, and he’ll be vindicated in arguments with numerous people.”

In the end, however, I’m with Friedersdorf that the best prediction method is unfortunately the least popular one: “Just wait until the votes are counted.”