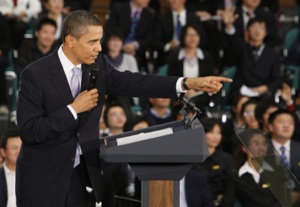 President Obama gave lengthy answers to questions from Chinese students, and from all over China, at a town hall meeting yesterday, but one takeaway is burning up the internet, or “series of tubes,” as our President might call it. The New Media President has never used Twitter? Now, you know why you couldn’t get him to play #1stDraftMovies.

While this is a disappointing revelation for those who thought their advice would go @BarackObama and into US policy, we here at Mediaite should have seen this coming.

Here’s what the President said about his Twitter non-habits:

Well, first of all, let me say that I have never used Twitter. I noticed that young people — they’re very busy with all these electronics. My thumbs are too clumsy to type in things on the phone.

There will be those who immediately point out that you don’t need a phone to use twitter. That’s true, but in July, Press Secretary Robert Gibbs revealed that, aside from those on their “new media” team, Twitter is banned on White House computers. While researching that story for Asylum, I contacted the White House to see just how far up the food chain the ban went. When asked if the President had White House access to Twitter, a White house aide told me, “People trained to use Twitter with the presidential records act, have official access to Twitter.” A definitive non-“yes” of an answer.

This is a simple situation to remedy. Surely there must be some brave cellphone manufacturer out there who can whip up a special voice-recognition Twitter phone for our Commander-in-Chief. Dammit, America needs to know what he’s listening to on Blip.fm, or how he thinks Jake Tapper can do his job better!

Seriously, if people can’t even let him take ten minutes to fill out an NCAA bracket, do you really think he needs to be messing around on Twitter?

On the other hand, there’s an argument that the right is sure to bring up. With that knowledge, all I can really do here is annoy them by stealing their thunder.

Yee-hah, that’s funny. Laugh it up. But while the right suddenly obsesses about breaches in international protocol, I would point to the strength of the rest of Obama’s remarks about free speech and the internet, remarks so strong, China banned Jake Tapper just for writing about them.

AMBASSADOR HUNTSMAN: That’s right. And not surprisingly, “in a country with 350 million Internet users and 60 million bloggers, do you know of the firewall?” And second, “should we be able to use Twitter freely” — is the question.

PRESIDENT OBAMA: Well, first of all, let me say that I have never used Twitter. I noticed that young people — they’re very busy with all these electronics. My thumbs are too clumsy to type in things on the phone. But I am a big believer in technology and I’m a big believer in openness when it comes to the flow of information. I think that the more freely information flows, the stronger the society becomes, because then citizens of countries around the world can hold their own governments accountable. They can begin to think for themselves. That generates new ideas. It encourages creativity.

And so I’ve always been a strong supporter of open Internet use. I’m a big supporter of non-censorship. This is part of the tradition of the United States that I discussed before, and I recognize that different countries have different traditions. I can tell you that in the United States, the fact that we have free Internet — or unrestricted Internet access is a source of strength, and I think should be encouraged.

Now, I should tell you, I should be honest, as President of the United States, there are times where I wish information didn’t flow so freely because then I wouldn’t have to listen to people criticizing me all the time. I think people naturally are — when they’re in positions of power sometimes thinks, oh, how could that person say that about me, or that’s irresponsible, or — but the truth is that because in the United States information is free, and I have a lot of critics in the United States who can say all kinds of things about me, I actually think that that makes our democracy stronger and it makes me a better leader because it forces me to hear opinions that I don’t want to hear. It forces me to examine what I’m doing on a day-to-day basis to see, am I really doing the very best that I could be doing for the people of the United States.

And I think the Internet has become an even more powerful tool for that kind of citizen participation. In fact, one of the reasons that I won the presidency was because we were able to mobilize young people like yourself to get involved through the Internet. Initially, nobody thought we could win because we didn’t have necessarily the most wealthy supporters; we didn’t have the most powerful political brokers. But through the Internet, people became excited about our campaign and they started to organize and meet and set up campaign activities and events and rallies. And it really ended up creating the kind of bottom-up movement that allowed us to do very well.

Now, that’s not just true in — for government and politics. It’s also true for business. You think about a company like Google that only 20 years ago was — less than 20 years ago was the idea of a couple of people not much older than you. It was a science project. And suddenly because of the Internet, they were able to create an industry that has revolutionized commerce all around the world. So if it had not been for the freedom and the openness that the Internet allows, Google wouldn’t exist.

So I’m a big supporter of not restricting Internet use, Internet access, other information technologies like Twitter. The more open we are, the more we can communicate. And it also helps to draw the world together.

Think about — when I think about my daughters, Malia and Sasha — one is 11, one is 8 — from their room, they can get on the Internet and they can travel to Shanghai. They can go anyplace in the world and they can learn about anything they want to learn about. And that’s just an enormous power that they have. And that helps, I think, promote the kind of understanding that we talked about.

Now, as I said before, there’s always a downside to technology. It also means that terrorists are able to organize on the Internet in ways that they might not have been able to do before. Extremists can mobilize. And so there’s some price that you pay for openness, there’s no denying that. But I think that the good outweighs the bad so much that it’s better to maintain that openness. And that’s part of why I’m so glad that the Internet was part of this forum. Okay?