Should Bernie Sanders Have Used the N-Word to ‘Critique Racism’ in His Book? 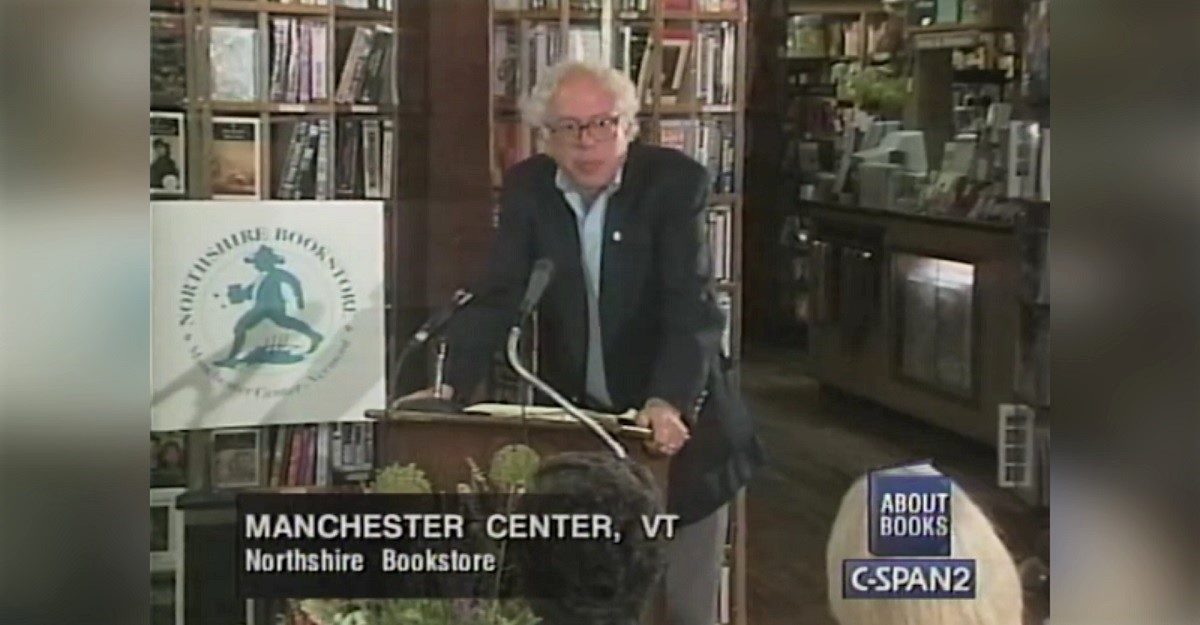 Independent Vermont Senator and Democratic presidential candidate Bernie Sanders’ campaign defended the candidate’s use of the uncensored n-word in a 1997 book, a defense that many people aren’t buying. Was it appropriate, and was Sanders “critiquing racism,” or excusing it?

The passage from Sanders’ 1997 book “Outsider in the House” was first surfaced by The Daily Caller — itself a hotbed of white nationalism that was founded by Fox News host and white supremacy-denier Tucker Carlson — and contained two uses of the uncensored n-word in quotation marks.

In the portion that the site quoted, Sanders wrote:

“For a hundred years, the white workers of the South were the most exploited white workers in America. They were paid the lowest wages, they endured the worst working conditions, their housing was abysmal, their kids went to the most backward schools, and very few could send their children to college. But what did they have? They were given ‘niggers’ to hate and look down on, ‘niggers’ who couldn’t vote, drink at their water fountains, use the same bathrooms, or sit up front in the buses or movie theaters.”

Sanders campaign National Press Secretary Briahna Joy Gray defended the passage in a statement by saying that he was “critiquing racism” with “a recounting — and criticism — of the Republican strategy that was infamously described by GOP strategist Lee Atwater in 1981, which involved using racial bigotry and epithets to demonize people of color.”

That defense is factually ahistorical — Sanders was describing the Jim Crow era, whereas the Southern Strategy was a political response to the ostensible end of legalized Jim Crow — but it tracks philosophically.

Many people took issue with Gray’s statement, both for its defense of the slur itself, and the substance of that defense. Rolling Stone’s Jamil Smith understood what Sanders was trying to say, but questioned the use of the slur:

”They were given ‘niggers’ to hate and look down on, ‘niggers’ who couldn’t vote, drink at their water fountains…” I get what @BernieSanders was writing about white Southern workers, but he didn’t need to go full Tarantino. Or be defensive about it now. https://t.co/xRC46I2qbU

Stop saying ‘nigger’. Unless you are directly quoting someone, do not say that word. EVER.

Briahna Joy Gray’s attempted defense of Bernie Sanders’ use of that word is such an embarrassment. Jesus Christ.

What is even happening.

Let me just explain where we are right now.

I have had Bernie stans in my mentions for 3 days explaining how it’s ok that he used the word nigger in 1997, and then again in 2015 when he reprinted the book and released an audio version.

That’s where we are. So we’re all clear.

This is a fairly simple judgment to make. According to The Associated Press stylebook, “You should only use derogatory terms in direct quotes when they are essential to the story and should then be flagged in an editor’s note below.”

But Bernie wasn’t quoting anyone, he simply placed the term in scare-quotes as shorthand. As many folks pointed out, it was unnecessary. It was a literary use, not a factual one, likely done in an attempt to make the surrounding critique more provocative or powerful.

Other Sanders defenders pointed to the time elapsed since the book’s publication, although it was updated in 2015.

Things were different in 1997, but not that different. Someone tried to tell Gandy that the euphemism “n-word” hadn’t even been invented in 1997, but that’s not even close to true. It has been around for years and became ubiquitous during the trial of OJ Simpson.

Shareblue senior writer and frequent Bernie Sanders critic Oliver Willis made the salient point that the use of the term should not be used to suggest that Sanders is, himself, a racist, and called outrage over the issue “stupid”:

this is not bernie sanders being racist and i think people are being stupid. proof once again that primaries fry people’s brain cells. https://t.co/vbIdrPXkbr

But Willis did agree that the substance of Sanders’ passage was lacking:

and that part of it is dumb and i disagree with it. but people are making it into “bernie said the n-word” and thats stupid.

To be honest, it’s a usage that I probably would have defended in 1997, and maybe even more recently. But being wrong about when it is acceptable to use the n-word is just a part of being white. There are some narrow contexts in which there is utility in spelling out the entire word, but in almost every case, that utility is badly outweighed once you consider the impact of the word on every reader.

Spelling out racial slurs, even in direct quotes, introduces trauma that is unnecessary in most cases.

It’s unlikely that Sanders will be asked directly about this passage – members of the media are too invested in preserving this contextual privilege for themselves – but if he is, I hope Sanders will apologize and say that he’s thought better of the impact of those words, regardless of their intent.

But the intent of Bernie’s passage is also in question. Many people pointed out that the purpose of the passage was to excuse the racism of southern whites.

The fact of the matter is, bernie used the word to excuse the racism of the white working class that he’s so goddamn obsessed with.

And that’s why when he loses the nomination, I am going to laugh and celebrate.

You cultists are the actual worst people.

Ridiculous defense. Sanders wasn’t critiquing racism – he was excusing it in the pursuit of an economic argument. And the use of the N word was gratuitous, and wildly unecessary. He was quoting no one. https://t.co/fhbCl98Z2e

This is a slightly tougher nut to crack because the broad strokes of Sanders’ argument are fairly common.

Massachusetts Senator and friendly Sanders rival Elizabeth Warren — who was a Republican until 1996 — made a similar point in her speech at the 2016 Democratic national convention, but without using the n-word.

“‘Divide and Conquer’ is an old story in America,” Warren said. “Dr. Martin Luther King knew it. After his march from Selma to Montgomery, he spoke of how segregation was created to keep people divided. Instead of higher wages for workers, Dr. King described how poor whites in the South were fed Jim Crow, which told a poor white worker that, ‘No matter how bad off he was, at least he was a white man, better than the black man.’ Racial hatred was part of keeping the powerful on top.”

She went on to add “When we turn on each other, bankers can run our economy for Wall Street, oil companies can fight off clean energy, and giant corporations can ship the last good jobs overseas.”

In both cases, especially Sanders’, the argument can be made that they are excusing racism to some degree by blaming a campaign by powerful elites for the racism of the poor white people who fell under its spell. At best, Warren and Sanders are incomplete in their assessment of political racism.

Dr. Martin Luther King did, indeed, speak the quote that Warren cited — and which Sanders appears to have adapted without credit in his book — in his 1965 speech following the Selma to Montgomery march:

If it may be said of the slavery era that the white man took the world and gave the Negro Jesus, then it may be said of the Reconstruction era that the southern aristocracy took the world and gave the poor white man Jim Crow. He gave him Jim Crow. And when his wrinkled stomach cried out for the food that his empty pockets could not provide, he ate Jim Crow, a psychological bird that told him that no matter how bad off he was, at least he was a white man, better than the black man. And he ate Jim Crow. And when his undernourished children cried out for the necessities that his low wages could not provide, he showed them the Jim Crow signs on the buses and in the stores, on the streets and in the public buildings. And his children, too, learned to feed upon Jim Crow, their last outpost of psychological oblivion.

The key difference between the Sanders/Warren construct and what Dr. King actually said is that the white racists ate it up. Rich white people didn’t give poor whites black people to hate, they already hated them.

In his 1964 book Why We Can’t Wait, Dr. King even spoke of poor white people as “derivative victims” of slavery and its aftermath, but again placed the blame with their own prejudices:

Many poor whites, however, were the derivative victims of slavery. As long as labor was cheapened by the involuntary servitude of the black man, the freedom of white labor, especially in the South, was little more than a myth. It was free only to bargain from the depressed base imposed by slavery upon the whole labor market. Nor did this derivative bondage end when formal slavery gave way to the de facto slavery of discrimination. To this day the white poor also suffer deprivation and the humiliation of poverty if not of color. They are chained by the weight of discrimination, though its badge of degradation does not mark them. It corrupts their lives, frustrates their opportunities and withers their education. In one sense it is more evil for them, because it has confused so many by prejudice that they have supported their own oppressors.

And lest anyone think the sincere racism that fueled Jim Crow and fuels the Southern Strategy is confined to poor whites, remember that Ronald Reagan didn’t just exploit racism for political gain, he sincerely thought of black people as monkeys.

All of this might seem like obsessing on and reading too much into a single paragraph, if not for the fact that Sanders has a long history of centering white voters, excusing racism, and conflating race issues with class.

There’s every chance that this issue won’t ever break through to the mainstream media because it’s a complex issue.

And it might not do much to change existing opinions of Sanders. His supporters rightly credit him as an early and consistent supporter of civil rights, and for his endorsement of Jesse Jackson in the 1988 presidential race. His critics point to his relentless courtship of white voters and frequent bungling of black outreach.

If these criticisms do somehow reach Sanders, he would be wise to hold off on reacting defensively. We all know he was once chained to a black woman and said “black” 50 times and is not a racist like Donald Trump or his grandpa, Ronald Reagan. But if existing opinion holds, both Sanders and Warren are going to have a tough time chipping away at Joe Biden’s dominance with black voters, who are key to winning a Democratic primary.

It is true that Biden has a closet full of ham fists when it comes to race, but as his recovery from the debate dustup with Senator Kamala Harris shows, that baggage seems to be baked in. The task for Sanders and Warren is to win those voters over, and tin-eared episodes like this, or like Warren’s Native American controversy and GOP past, aren’t helping.

The person who takes on an overt racist like Donald Trump doesn’t have to be perfect on issues of race, but they do have to be willing to listen.