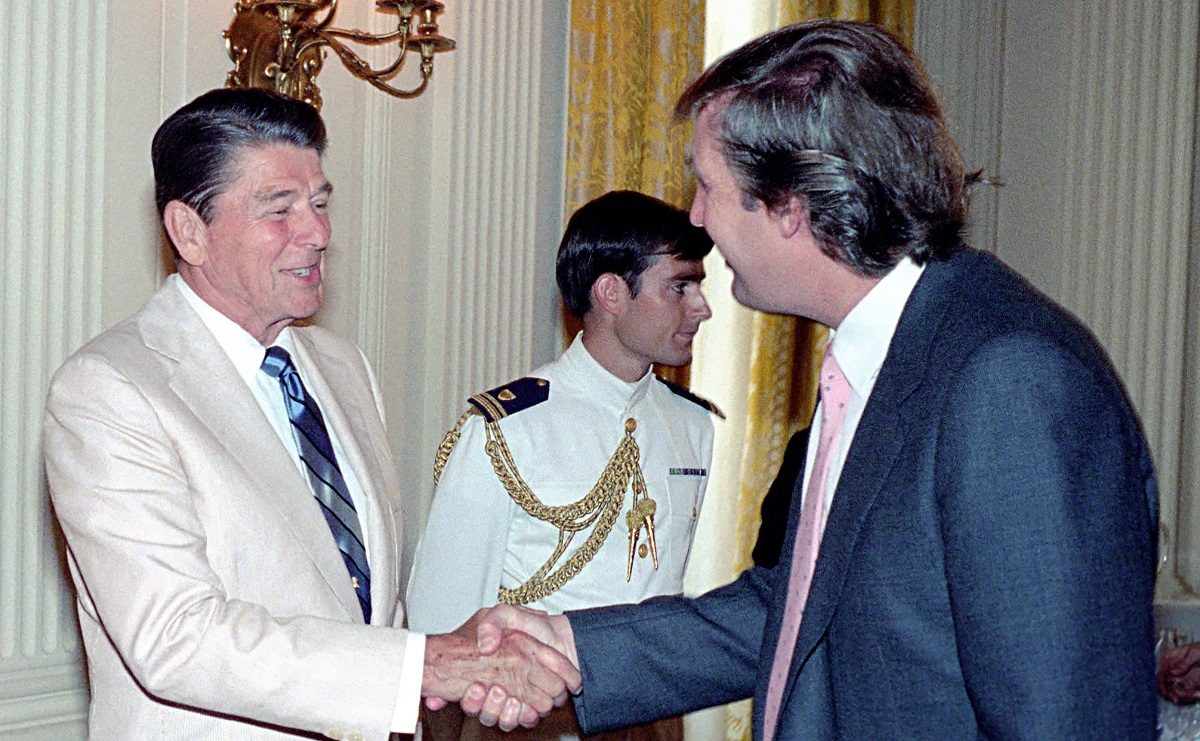 It was a schadenfreudelicious week for people who have spent their lives being gaslit about Ronald Reagan‘s racism, even if the media largely ignored the release of a recording featuring overtly racist remarks by the man who has become a deity among Republicans, and an undeserving contrast to Donald Trump among the media and, yes, the Democratic Party.

You could be forgiven if you missed the news that a racist telephone conversation between then-California Governor Reagan and then-President Richard Nixon was unearthed and released this week.

The call took place in October of 1971, during which Reagan and Nixon discussed the United Nations delegation from the United Republic of Tanzania following a vote on a resolution to seat China in the world body.

“Last night, I tell you, to watch that thing on television as I did,” Reagan said in the brief recording.

“To see those, those monkeys from those African countries — damn them, they’re still uncomfortable wearing shoes!” Reagan continued, to hearty laughter from Nixon.

That CNN clip was the first airing of Reagan’s racist remarks on national television, nearly a full day after the recording was published by The Atlantic.

A few hours later, MSNBC’s Ari Melber aired the tape on his The Beat with Ari Melber. More than 24 hours later, Chris Hayes amd Don Lemon were next to report on the tape for their respective networks. Fox News has yet to mention it.

Among broadcast networks, only CBS News’ Norah O’Donnell reported on the recording within the first two days of its release, tossing to White House correspondent Paula Reid, who played the tape and noted that “even in 1971” the language was shocking.

Reid’s aside is part of the reason this revelation is so satisfying for those of us who have seen Reagan for who he was since the beginning, and is also likely the reason for the media white-out of this story. Reagan’s comment is so unambiguously racist that there’s no way anyone can make excuses for it, and so casual that it’s obviously not the first or last time he’d made such comments when he thought no one decent would ever hear them.

As devastating as this is for Republicans who worship Reagan and faint whenever someone like Alexandria Ocasio-Cortez calls out his already-obvious racism, it’s arguably even worse for others. Republicans have proven themselves capable of ignoring the most poorly-coded racism for decades, and excusing the overt racism of Trump time and again. If they had to defend Reagan’s racist comments, they would not have far to fall.

But Reagan’s unmasking is tougher on members of the media who have spent the years since his death largely going along with the GOP’s campaign to deify him, and the Democrats who have been concern-praising Reagan for years to troll modern-day Republicans. President Barack Obama, God love him, used to do this constantly, and Nancy Pelosi is still doing it.

And it is difficult to imagine that if a similar tape were discovered outing a Democratic politician of Reagan’s stature — say, Barack Obama ranting about, oh, I don’t know, “Whitey?” — that cable news would not have played it on a loop for several weeks.

The truth is that many of us did not need this tape to know who Reagan was. When Reagan kicked off his 1980 general election presidential campaign with a speech on “states’ rights” in Philadelphia, Mississippi, where three civil rights activists were murdered in 1964, we knew who he was.

When he opposed the Dr. Martin Luther King, Jr. Day holiday until the day he was forced to sign it, and entertained racist Sen. Jesse Helms‘ smear against Dr. King on national television, we knew who he was.

When he responded to a black journalist’s question about the state of race relations by complaining that you couldn’t attack Rev. Jesse Jackson without being accused of a “racial attack,” we knew who he was.

When he vetoed sanctions against the racist government of South Africa, we knew who he was.

When he posed for a picture with the Sambo lawn jockey at his ranch, we knew who he was.

When he was endorsed for president twice by the Ku Klux Klan, we knew who he was, and so did they.

When he complained about the Civil Rights Act not being used enough to protect white people, we knew who he was.

And when Donald Trump came down that escalator and declared Mexican immigrants are “rapists,” we knew who he was. He was Reagan again. Reagan out loud.

Ronald Reagan and his worshipers, with the media’s help, tilled the soil for Trump for a generation, and when we knew who he was, we knew he could win the Republicans. And, sadly, the election.