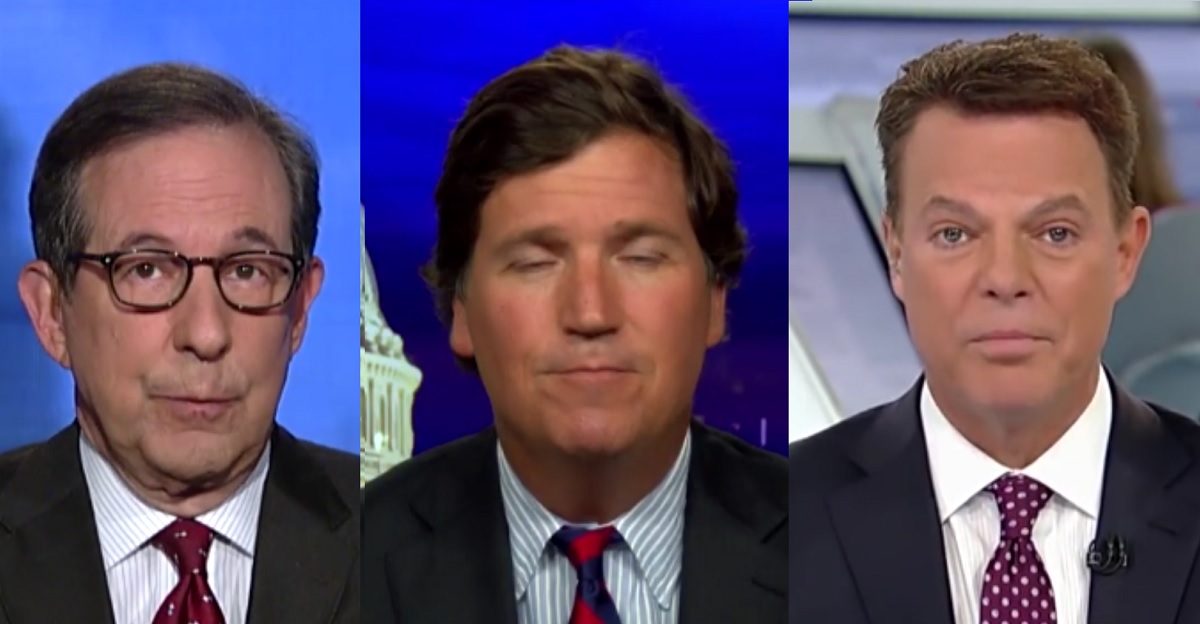 Chris Wallace and Shepard Smith have achieved fame and fortune by being voices of relative reason in the opinion-dominated Fox News landscape, but the time has come for them to take a stand against the home of Tucker Carlson‘s dangerous rhetoric, and take their talents elsewhere.

The offenses of Fox News’ “opinion side” — and to a lesser degree, the news side — are numerous and far-reaching, many of which have been catalogued on this site. They range from merely embarrassing falsehoods to dangerously inflammatory lies, with a through-line of  both overt and poorly-coded racism.

Through it all, the folks on the “hard news” side have taken refuge behind their alleged partition from the “opinion” folks, with varying degrees of success.

Privately, many past and present Fox News journalists have confided a keen awareness of the ways in which the network’s editorial culture undermines their attempts to do good journalism. Several have even thanked me for setting the record straight when the network misused or misrepresented their reporting. But, they argue, Fox News has newsgathering resources and an audience that other networks can’t touch.

Of those that remain, Wallace and Smith are the most unblemished of the bunch, the most creditable in their efforts to practice good journalism in that hostile environment.

Wallace has distinguished himself by frequently peppering Trumpworld figures with tough questions, sometimes devastatingly so. Thanks to his position at Fox News, Chris Wallace nailing Trump officials has become its own insanely popular subgenre of journalism.

Wallace is far from perfect, but his skill as a questioner and knack for preparation are among the best in the business.

Shepard Smith has long been the fly in the conservative ointment at Fox News, doling out unwelcome truths and even more unwelcome facts at regular intervals, along with truly incisive commentary that flies in the face of the network’s opinion side.

In fact, it is Smith who has move me to write this letter.

On the heels of Tucker Carlson’s rant proclaiming white supremacy is a “hoax,” Smith delivered a thinly-veiled rebuke by saying “white nationalism is without question a very serious problem in America.”

Smith’s rebuke inspired an epic hissy fit from former Ku Klux Klan Grand Wizard David Duke, which should tell you everything you need to know. And so here we are.

Quit now, while you can still make a difference.

I know you’ve tried to fight the good fight from within at Fox News, but it is no longer enough. And I know that there are (a few) others who are similarly situated, who try to do good work while holding their noses. They don’t have the profile that you two have, although I would obviously encourage them to let their consciences guide them similarly.

You have worked within a network that fosters and profits from racism for a very long time, and whatever it is you’ve been telling yourselves all these years, that it’s all just the “opinion” guys (it isn’t) or that you are the last bulwark against — to quote Jon Stewart — “Bullshit Mountain,” whatever it is, it no longer applies.

I’m not saying everything that went before was less disgusting than what’s happening now, but it was empirically less dangerous.

Surely you have noticed the extensive reporting that The New York Times did on the intersection of the El Paso shooting suspect’s manifesto and the language of “invasion” that is used relentlessly on your network. In fact, I’d like to think you both had the decency to notice it on your own.

And surely you noticed that after the shooting, your colleagues not only didn’t tone down the “invasion” rhetoric, they defended it. When Sandra Smith did push back on a guest’s use of the term, it was because “People will take issue with you calling it that. It is obviously a sensitive issue right now.”

The appropriate remedies for this situation are, unfortunately, unavailable to us.

If Fox News personalities like Carlson spent several years apologizing for their dangerous campaign against immigrants and others, and spent those years speaking nothing but the truth and selecting stories on the basis of the public interest, and called out Trump’s every racist utterance starting with calling Mexicans “rapists” on the first day of his campaign, that would not come close to evening things up.

But none of those things are going to happen. What can happen is that the two of you can recognize that this is a bridge too far, that there is no redeeming value in contributing to an enterprise that would engage the likes of these people, that you could find a welcome home at any news outlet, and quit loudly.

Your departures would not remedy all the damage that has been done, but they would send the powerful message that there are some assaults on decency that cannot be walled off, some harms that cannot be soothed by scare-quoted fairness and balance, some stories to which there are not two sides.

You can no longer safely continue your toils next to this reservoir of hate. The dam has broken, and you can either run for higher ground, or drown in it.
—