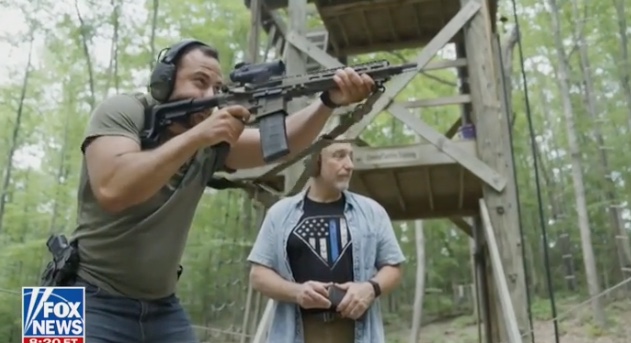 Tucker Carlson has a new series set to air on the streaming service Fox Nation titled Patriot Purge, the trailer for which he aired Wednesday night on Fox News.

The trailer for the show elicited exactly the outraged reaction that Carlson likely expected, and probably even wanted. Judged purely on the feverish trailer, Patriot Purge is set to be a deeply dangerous and irresponsible bit of programming. Its very existence raises troubling questions about the decision-making at Fox News Media.

To label the documentary-style series a fever pitch of deranged conspiracy theories would be an understatement. It casts conservative Americans as targets of the liberal elite, featuring harrowing imagery of Guantanamo detainees being waterboarded while a voice-over claims liberals are hunting “patriots” like them.

Carlson introduced the clip by warning his viewers: “The U.S government has in fact launched a new war on terror, and it’s not against al-Qaeda, it’s against American citizens.”

He then added that this is an “attack on core civil liberties,” and that “it’s essential that you know what’s happening, and that you resist it.”

The trailer then opens with what sounds like a Revolutionary War snare drum and footage of the killing of Ashli Babbit as she tried to breach the House chamber on January 6th. What follows is a series of provocative images designed to warn viewers: helicopters hovering over the Capitol, January 6th rioters, men shooting guns.

In a little bit of Infowars-inspired lunacy, another subject of the series says the January 6 Capitol attack might have been fake. “False flags have happened in this country, one of which may have been January 6th,” she says, intercut with videos of terrorists and the overwrought musical score.

The trailer ends with a brief snippet of the “Battle Hymn of the Republic.”

As Mediaite’s Michael Luciano described it: “The trailer is, in a word, batshit.”

The level of outrage sparked by the trailer goes beyond the Twitter chattering class to whom the series seems designed to extend a hearty “fuck you,” and which Fox News delights in mocking.

There is a greater level of concern within Fox News. A number of individuals who work at the network reached out to me to express disgust over the series, including a producer, a mid-level executive, and an on-air talent. So far.

One person said simply, via text: “this is too far. WAY too far.”

Another Fox News personality asked, “how does this get approved?”

A long-time cable news executive said to me flatly, “Roger Ailes would never have let this happen under his watch,” which is correct. Ailes knew when to take his foot off the gas, and when not to take things too far, even if it meant a short-term hit to the bottom line.

That level of programming discretion, however, seems to currently be in short supply at Fox News.

All of which raises the fundamental question: who is responsible for this?  Yes, of course, Carlson is the top culprit of the series he hosted, promoted on his show, and, produced under his own production shingle “Tucker Carlson Originals.” The series will — thankfully — not air on Fox News, but will be nestled behind a paywall on streaming service Fox Nation.

Earlier in my career, I produced television programs and worked closely with development departments to start up new shows. I know firsthand that these sorts of endeavors do not happen in a vacuum. There are nodes of ascension throughout the creative process, from the original concept to script approval to final cut sign-0ff.

I grew up in the 1970s in Hutchinson, Kansas, a town of roughly 40,000 residents that’s about 40 minutes from Wichita. I feel lucky to have stayed in touch with many friends from that era. Like everyone else, I’ve witnessed a strange development over the past 40 years or so as a result of the growing political divide in our nation.

Many of my old friends are bitterly angry. And I know that many will watch the trailer above and actually consider taking up arms against the nameless and faceless enemies that Carlson describes as an urgent and real threat.  That is not an exaggeration, and it’s why I find this series so deeply concerning — particularly when recent polls show more than half of Trump voters now favor secession.

Carlson loves to play the part of a populist who speaks truth to the victims of a gamed society that benefits the privileged. The irony here is that Carlson was born into great wealth, and splits his time between compounds in rural Maine, coastal Florida, and of course Washington D.C. where he often hosts his show. He is not from the same background as much of his target audience.

So, to be charitable: perhaps he doesn’t realize that his angry, conspiratorial message will be taken literally by my friends and former schoolmates in Reno County, Kansas, and other parts of rural America.

The trailer for the series sends such a dangerous message to Tucker Carlson viewers that it makes his past conspiratorial hijinks feel like child’s play. It represents an entirely new level of outrage, a deeply irresponsible one. It’s called “Patriot Purge” for chrissakes, in case the message was lost on anyone.

It has long been rumored that Tucker Carlson has unlimited latitude at Fox News, largely because he is the top earner at the network, earning him a completely free pass from leadership.

Jason Klarman is the President of Fox Nation, so his name is top of the list for the question:  How can you justify producing a series that serves as a provocative call to arms, on the basis of clearly insane conspiracy theories?

A bigger question than who is responsible for this dangerous tripe is this: Is a major American company so eager to please its star that it is willing to produce content that is filled with lies and presented in a documentary-style format and lending credibility to dangerous conspiracy theories, all in the name of improving the bottom line?

Asked another way, when does outrage-based opinion media go too far?

The answer: this is too far, and there needs to be accountability. Did somebody say “Purge?”