A House Republican pulled out a screengrab from Wednesday’s CNN coverage of Robert Mueller’s hearing as part of a demonstration to argue that the special counsel cannot legally prove exoneration.

Rep. Mike Turner (R-OH) was questioning Mueller on the legal concept of exoneration, arguing it doesn’t exist and that neither Mueller or Attorney General Bill Barr could “exonerate” someone.

“The report states, accordingly, while this report does not conclude that the president committed a crime, it does not exonerate him,” Turner said. “There’s no office of exoneration at the Attorney general’s office, no certificate at the bottom of his desk. Mr. Mueller, would you agree with me that the Attorney General does not have the power to exonerate?”

Mueller frequently declined to discuss the question, saying, “I’m not prepared to deal with a legal discussion in that arena.”

As part of his argument, Turner pulled out a number of law books and a screen capture from today’s CNN’s coverage with a chyron talking about how Mueller said he did not exonerate Donald Trump. The CNN graphic read “Mueller: Trump Was Not Exonerated. 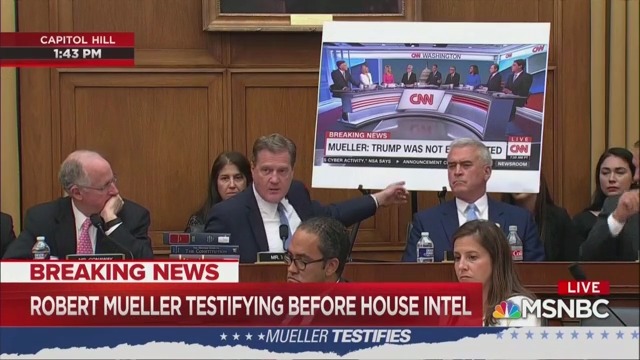 “In our criminal justice system, there is no power to exonerate,” Turner said. “The statement about exoneration is meaningless … it’s a meaningless word that has no legal meaning.”