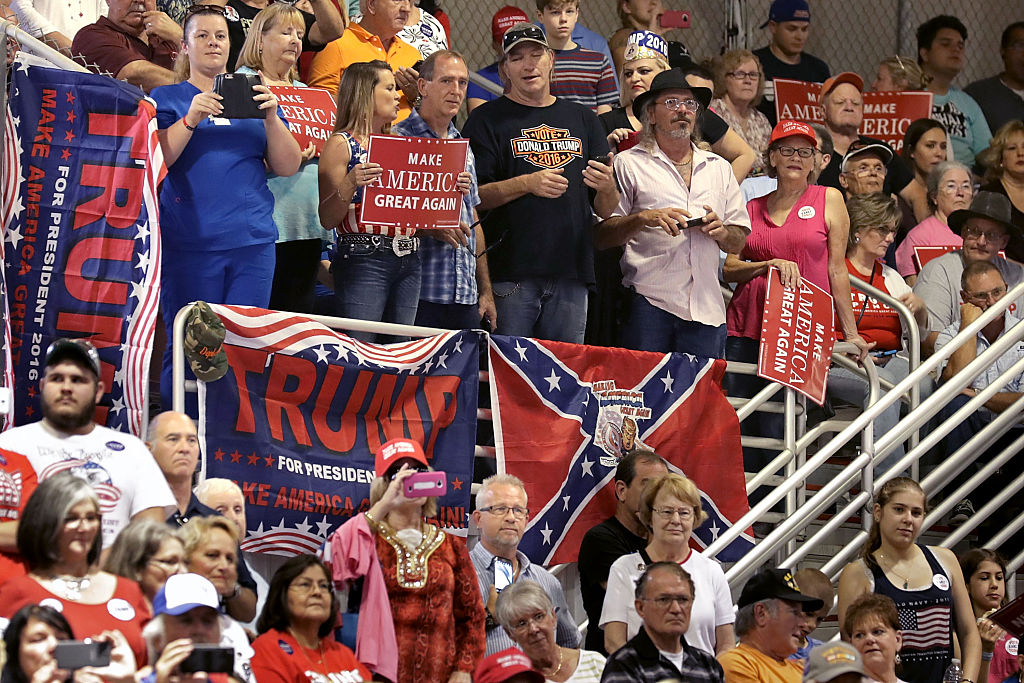 The Lincoln Project, the anti-Trump PAC founded by several former Republicans, was on a tear Wednesday responding to President Donald Trump‘s ongoing support for monuments and military bases named to honor leaders of the Confederacy, issuing a statement calling Trump “the Confederacy’s second president.”

As protests have swept across the country after George Floyd was killed last month by Minneapolis police officers, countless companies, organizations, and institutions have issued statements of support for Black Lives Matter and combating racism and police brutality.

The movement has also renewed the debate about the proper treatment of historical monuments, military bases, and other buildings named after Confederate leaders. This is especially true considering that many of the monuments were erected and names designated decades after the Civil War had ended, giving credence to critics who say these were not built to honor those specific men while they lived, but to enforce segregation during the Jim Crow Era, or later, as a rebuke to the progress African-Americans were making during the Civil Rights protests of the mid-twentieth century.

This week, HBO Max announced it was pulling the Civil War epic film Gone With the Wind from its library until it can be re-released with a “discussion of its historical context” and “denouncement” of the racist depictions in the film, and NASCAR announced it was banning the display of the Confederate flag from its racetracks.

Both the U.S. Marines and Navy have issued statements banning the flag’s display on military property as well, and the Army indicated it was considering renaming several military bases named after Confederate leaders.

Trump responded to that last bit of news by posting several tweets vociferously rejecting the idea as an attempt to tamper with “our history as the Greatest Nation in the World.”

“These Monumental and very Powerful Bases have become part of a Great American Heritage, and a history of Winning, Victory, and Freedom,” he wrote, adding that he would “not even consider the renaming of these Magnificent and Fabled Military Installations.”

The Lincoln Project responded by retweeting a video ad they had released a week ago titled “Flag of Treason.” The video, which has been seen nearly 10 million times on Twitter and YouTube combined, calls the Confederate flag “a flag of hate, and division, and losers,” and asks “so why does it keep showing up today at events supporting Donald Trump?”

“For us, it says that this is a time for choosing,” concludes the ad. “America,” as an American flag is shown waving in the breeze, “or Trump?” as the image switches to a Confederate flag.

Trump made clear today which flag he stands with. The one that stands for failure, disunion, and oppression. #AmericaOrTrump

The PAC added another tweet about an hour later, directly naming Trump as “the Confederacy’s second president” in a statement that explains that the founders of the group had “never imagined” when they named the PAC after President Abraham Lincoln “that the president would go as far as honoring the Confederate generals who fought against the United States of America to preserve slavery and uphold white supremacy.”

“For all intents and purposes, Donald Trump today became the Confederacy’s second president,” the statement continues. “We cannot allow this,” vowing that “The Lincoln Project and its allies will be doubling its efforts to protect the U.S. Constitution and this nation” by helping defeat Trump in November.

Reached for comment by Mediaite, Lincoln Project co-founder Rick Wilson reaffirmed the PAC’s statement on Twitter, noting that “just yesterday, we saw Trump supporters reenacting the murder of George Floyd proudly displaying a Trump flag next to the Confederate flag.”

Trump, said Wilson, “has seemingly decided that he’s not the President of the United States of America, but of the bitter remnants of the treasonous past of the Confederacy.”

“His tolerance for the Confederacy’s racism and treason, and for the continued presence of their symbols displayed by some of his supporters tells us everything we need to know about the Confederacy’s second president, Donald J. Trump.”

Editor’s Note: The author is a former political colleague and long-time friend of Rick Wilson.