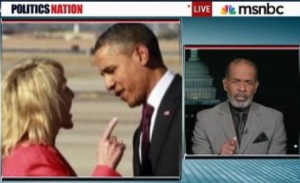 On Thursday night’s Politics Nation, host Al Sharpton called out Arizona Gov. Jan Brewer‘s disrespectful conduct toward President Obama during their tarmac tussle, connecting it to a pattern of such contemptuous behavior by Republican leaders. Sirius XM radio host Joe Madison gave it a name, saying that there are people “who cannot stand the fact that this is an african-american who is now one of the most powerful individuals on the planet.”

He played video of Brewer recounting the incident to reporters, calling the President “thin-skinned,” and saying she “felt a little bit threatened.”

To his credit, Rev. Sharpton is one of the few commentators to key in on the racial subtext of Brewer’s remarks. “Thin skinned? You felt threatened?” he said. “What does that even mean, you felt threatened? By the President of the United States? This is yet another example of disrespect and delegitimatizing this president.”

Rev. Al then played a fairly comprehensive rundown of clips that featured prominent Republicans behaving disrespectfully toward the President, including Rep. Joe Wilson‘s infamous “You lie!” moment. Speaking of lying, Sharpton also noted Gov. Brewer’s dueling descriptions of her 2010 meeting with the President, which was the genesis of the tarmac dispute.

“So Governor Brewer,” Rev. Sharpton said, “when were you telling the truth? When you just walked out of the meeting and told the press in front of the White House, with a smile on your face, how it was cordial and how the tone was very good, positive, or when you wrote a book saying it was condescending, and he was lecturing you?”

He also characterized Brewer’s handing of a letter to the President as political grandstanding. That letter centers around what sounds like an invitation for the President to be lectured by Brewer, to learn at her knee, if you will. “I’d love an opportunity to share with you how we’ve been able to turn Arizona around with hard choices that turned out to be the right ones,” it reads.

Joe Madison weighed in by pointing out that even a small child knows it is disrespectful to point in someone’s face, and related some suggestions he got from his radio audience, including bending back her finger, to having the Secret Service jack Brewer up. “I give the President of the United States credit for doing what?” Madison said. “Walking away.”

Madison also told Rev. Al to add to his dis list Newt Gingrich’s (and others) tendency to refer to the President simply as “Obama,” and Republicans’ demands to see the President’s grades. “Excuse me,” Madison said, “what 50-year-old-plus man has to provide his grades? What, getting elected as the president of the Harvard Review is not enough?”

He continued, “This is nothing more, and I’ll just say it straight up. There are some people, not all, in this country who cannot stand the fact that this is an African-American who is now one of the most powerful individuals on the planet. And there are those who cannot consciously and subconsciously handle it.”

“You know you’re not going to get a debate from me,” Rev. Al replied. “They brought race in. They put a race deck on the table. If you pull a card, it’s a race card because they set the deck.”

What you have to ask yourself is not whether Republican leaders have been disrespectful to this president, but whether they have done so in ways that white presidents have not had to deal with. The same holds true for liberal critics of the President, are they treating him as they would a white Democratic president?

This doesn’t have to mean that all of these folks hate black people. People like Gov. Brewer and Speaker Gingrich ought to ask themselves if they have succumbed to something more insidious, this tendency in white media culture (or as I call it, “media culture”) to promote, at best, informality with (and among) black people, the effect of which is to lower the inhibition to behave bluntly.