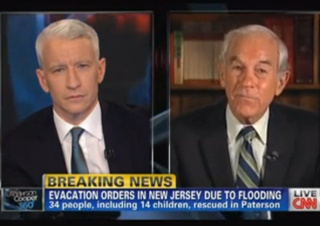 During a weekend defined by the fear of the inevitable destruction of nature, Rep. Ron Paul stood out among the 2012 Republican candidates for blasting FEMA’s work during a speech and calling for America to be less dependent on the federal government, “like 1900.” As 1900 is a year defined by one of the worst natural disasters in the history of Rep. Paul’s district, Anderson Cooper took him to task tonight on the claim, demanding to know whether Rep. Paul believed the government had any role in disaster response at all.

Rep. Paul opened by repeating the controversial claim that garnered him headlines: FEMA had been around “since 1979 and since then don’t have a very good record,” perhaps “the worst reputation of almost any” federal agency. In order to avoid the mad inefficiency of FEMA, he argued, “why not look at before we had FEMA?” as he did by citing 1900. He added to a follow-up question that “you create more hazard with the government” by making individuals and state governments dependent on the federal administration.

After the quick primer, Cooper cut to the meat and potatoes of the matter– the claim that we should look to 1900. The 1900 hurricane that hit Galveston, Texas, Cooper reminded Rep. Paul, resulted in terrible devastation: “6,000 people died in that storm,” partly due to the local officials not paying to construct a sea wall to protect the city. “Wouldn’t you be setting the stage for life or death decisions or gambles in poorer areas of the country?” Cooper asked.

Rep. Paul replied that Galveston “survived without FEMA and they did rebuild the city,” and that the sea wall was built well before FEMA was established in 1979, even if not soon enough to protect against the 1900 hurricane. He added that a federal administration keeping track of all the nation’s levees and other protective constructions was, to him, unmanageable. Which led Cooper to ask whether Rep. Paul believed there is “absolutely no role the federal government can play” in disaster relief. Rep. Paul replied that he did believe in rescue operations, and that the federal government could take a “modest and reasonable approach” by cutting federal spending– preferably overseas spending– and using the money to help clean up natural disaster messes. “The economic situation is dire,” Rep. Paul concluded, too much so to spend money on fixing the damage caused by natural disasters that local governments could spend.