Anderson Cooper Reacts To Second Plant Explosion: ‘Should I Get Out Of Here?’ 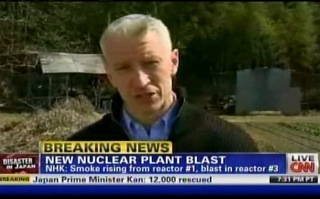 Anderson Cooper has made a career out of risking his life to gather news, and rarely has the CNN anchor appeared as rattled as he did tonight reporting from Japan. Discussing the possible meltdown ongoing at Fukushima’s Dai-Ichi plant with nuclear expert Jim Walsh, Cooper received the news of a new hydrogen explosion on the same complex. Upon hearing the news, Cooper turned to his crew, asked where the wind was blowing, and, in a moment of visible frailty, asked if it was time for him to go.

Cooper’s initial conversation with Walsh was interrupted by the breaking news that a blast was heard from reactor 3 at the Fukushima Dai-ichi plant, while white smoke was seen coming out of reactor 1. Walsh did not appear surprised; the massive amount of water being dumped into the reactor core creates an extraordinary amount of pressurized hydrogen gas, making explosions likely. However, it is still unclear what the nature of the explosion and the smoke is. Before asking Walsh for more guidance, Cooper turned to his crew, asking how far they were from Fukushima (about 100 kilometers north) and which way the wind was blowing (west). Cooper at first attempted to ask Walsh more broadly what the likelihood of Japanese authorities expanding the evacuation zone around the plant was, to which Walsh replied that the evacuation “depended on the particulars of this explosion.” Cooper then asked flat-out, fear palpable in his voice, “should I get out of here?”

Walsh tried to be reassuring, telling Cooper his guess was “that you’re okay,” though it is likely better to “err on the side of caution.”

While Japanese authorities have yet to expand the evacuation zone, Kyodo News is reporting that those within 20 miles of the plant were ordered to stay inside, though AP reports authorities are saying the reactor containers of both are intact.

Meanwhile, NBC reports officials are near confirming the explosion was due to compressed hydrogen:

Japanese officials say they believe a hydrogen explosion has occurred at Japan’s stricken Fukushima Daiichi nuclear plant, similar to an earlier one at a different unit in the facility.

A massive column of smoke was seen belching from the plant’s No. 3 unit Monday. The reactor had been under emergency watch for a possible explosion as pressure built up there following a hydrogen blast Saturday in the facility’s Unit 1.

Officials have been racing stave off multiple reactor meltdowns after a devastating quake and tsunami incapacitated the Fukushima plant.

More than 180,000 people have evacuated the area, and up to 160 may have been exposed to radiation.

AC360‘s coverage of the news via CNN below: