Ann Coulter To Hannity: ‘I Have An Unnamed Source In Kenya Who Says That Obama Was Born In Kenya’
video

Ann Coulter To Hannity: ‘I Have An Unnamed Source In Kenya Who Says That Obama Was Born In Kenya’ 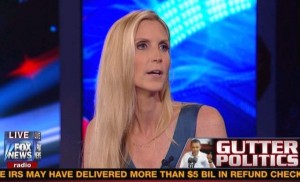 Ann Coulter appeared on Sean Hannity‘s show tonight to react to Senator Harry Reid‘s continued insistence that Mitt Romney has not paid taxes in a decade, despite not having the facts to back it up. Coulter mockingly responded to Reid by saying, “I have an unnamed source in Kenya who says that Obama was born in Kenya.”

RELATED: Mitt Romney Responds To Harry Reid: Time To ‘Put Up Or Shut Up’

Coulter claimed that President Obama and his political team have a history of disqualifying his opponents based on issues in their personal lives, citing examples from when Obama ran for political office in Illinois. She even brought up mainstream media news stories focusing on the personal lives of the McCains and Palins during the 2008 campaign.

Hannity agreed with Coulter and said that the Obama team has been bringing up so many irrelevant side issues because “he can’t run on his record.” He asked Coulter if the attacks on Romney can work. Coulter doubted it would.

“Not with so many people unemployed. I mean, the Obama campaign message is, ‘You can vote for the guy who put millions of people out of work, quadrupled the deficit, wrecked American health care, or you can vote for that really mean guy whose wife owns a horse.'”

And speaking of Ann Romney‘s horse, Hannity and Coulter brushed off a new add from MoveOn.org speaking from the perspective of Rafalca herself. Coulter maintained that Romney should not release his tax records, because she said it would be giving in to Obama’s “modus operandi” of making a big deal out of something “even if nothing’s there.”

The segment ended with a debate between the two of them over whether John Kerry is a gigolo or not. So at least it ended on a light note.