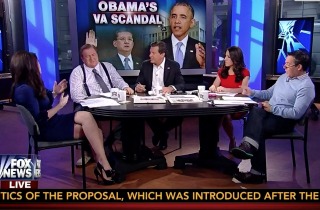 On Fox’s The Five today, Bob Beckel got testy with his co-hosts over the VA scandal and after listening to them criticize President Obama, he asked them point-blank if they seriously believe the President of the United States actually doesn’t care about the suffering of American veterans. Beckel was reacting to Eric Bolling‘s interview last night with former Pentagon spokesman JD Gordon, who said that accused terrorists at Guantanamo Bay are being treated better than America’s veterans.

The other four hosts jumped on this news and expressed their outrage at this kind of thing happening on Obama’s watch. Beckel got visibly agitated, said Obama’s not actually thinking about screwing over veterans like that, and asked, “Do you believe that this guy wakes up at night and says, ‘You know, let me think. I think I’m gonna treat the Guantanamo prisoners better medically than I’m gonna do for our veterans’?”

Greg Gutfeld didn’t suggest that was the case, but he did argue that a guiding principle Obama follows above all is a perception of tolerance towards the Muslim faith, and so Gitmo prisoners being treated better than veterans are an “unintended consequence of a PC administration.”

Andrea Tantaros, meanwhile, contended that the VA scandal is not so much a scandal as exemplary of what happens in a government-run health care system, and warned Obamacare would end up the same way. Eric Bolling agreed, saying that what the VA did is basically “rationing health care.”