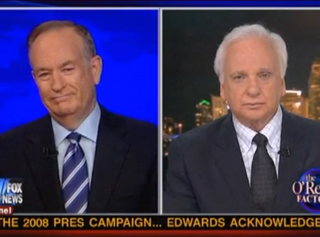 Dan Rather is on a media tour for his new book, but canceled on The O’Reilly Factor, instead showing up on The Daily Show and arguing that the media is anything but biased towards President Obama. On tonight’s Factor, Bill O’Reilly and Bernie Goldberg called his statements to Jon Stewart “delusional,” with Goldberg arguing that what Rather needed was not a media analyst, but “a psychiatrist.”

RELATED: Dan Rather Dismisses Liberal Media Bias Claims: ‘This Is A Sham’

“His statement is a sham– he’s not telling the truth,” O’Reilly fired back on his “Talking Points Memo” segment, citing a number of instances of bias, and today’s Politico column on the matter, concluding that “fair-minded people know that much of the media is working to see that Barack Obama is reelected.” Bringing Goldberg on, Goldberg wasn’t sure exactly how to approach. ” I’m not sure why you have a media analyst on for this, I think you need a psychiatrist– it’s delusion.” He noted that Rather’s “dispute is not with conservative critics of the media, it’s with the American people.”

O’Reilly looked back at the history of CBS, noting that Walter Cronkite was a “very, very left-wing guy,” but he could hide it and wasn’t “some crank.” To prove how biased Rather is, Goldberg noted that he explicitly said “in the end, what difference does it make what one candidate or another was doing during the Vietnam War?” a week before attacking President George W. Bush‘s National Guard service.

Ultimately both O’Reilly and Goldberg concluded that the bias would not have a profound effect– unless, Goldberg predicted, the race was sufficiently tight.