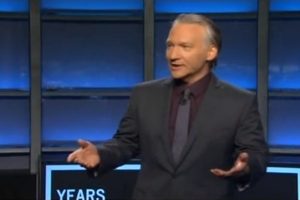 If you thought Glenn Beck putting on an evil witch voice to imitate Malia Obama was offensive, this one is going to blow your socks off. Last night, Bill Maher lamented President Barack Obama‘s “professorial” personality, noting with a hint of betrayal in his voice that he was expecting a “real black president”– you know, the kind that “lifts up his shirt so they can see the gun in his pants.”

No, that really is the entire joke, which you can watch below. After making a quip about former president George W. Bush making an unfortunate reappropriation of his famous Hurricane Katrina “heck of a job, Brownie” comment, Maher laments that Obama doesn’t bring a gun to BP meetings and “shoots somebody in the foot,” because that is what a “real black president” would do. He does not attribute this image of black people to racist Obama opponents, or do anything to clarify that this is not the way he believes black people should behave.

It seems almost unnecessary to make a list of every instance where Maher threw the “racist” tag on someone or a group of people that disgust him, but for the record he has attacked the Tea Partiers— actually, anyone that questions raising taxes— “anti-immigrant hoopies,” “older white people“… and it goes on. This is someone whose political identity is supposedly deeply rooted in a hatred of racism, someone who makes his paycheck self-righteously brandishing his tolerance, who just admitted on television that you can’t be a “real” black person without behaving like Tupac Shakur.

And that really is the sticking point here that makes this go from funny/offensive to just plain offensive. Some people have made a career of being “racist” comedians– and there’s no doubt that many black comedians use stereotypes for humor– but Maher seems to consider himself a serious political commentator, too. He appears on CNN to talk tell Wolf Blitzer how to fix the world. You can’t blur the line between satirist and commentator to that extent and expect people to let you off the hook for using minstrel show humor (which is really the only way to characterize a “haha, black people like to shoot people” joke).