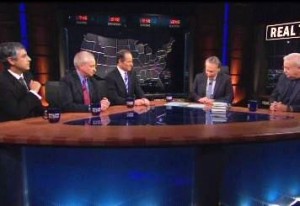 Bill Maher tonight swung at both Republican congressman Steve King and Bill O’Reilly for their controversial remarks about race this week and tied them into the general problem conservatives have with minorities. Two of Maher’s guests directly called King a “racist” for his comments on immigration, while Maher went after O’Reilly for pretending to know what’s in President Obama‘s mind about race, saying he and other conservatives know Obama just thinks “Kill whitey!”

Former Republican congressman Bob Ney didn’t sugarcoat it, saying “Something’s wrong with Congressman King,” and bashed his former colleague as “way off the reservation.” Reverend Jim Wallis said matter-of-factly, “Steve King is a racist,” adding that the immigration conversation needs to be about morality as well as politics.

Maher then brought up the “white backlash” to the Zimmerman verdict, and reminded the audience that when Obama spoke on race a week ago, he acknowledged that young black men commit crime at a high rate. Smash cut to O’Reilly citing the same statistic and bashing liberals like… the president for not talking about it. Maher surmised that people like O’Reilly don’t listen to Obama because they think they already know what’s in his mind, and “they know he’s thinking ‘Kill whitey!'”

Spitzer praised Obama’s speech on the verdict and remarked that the right-wing response was “revolting.” Wallis talked about the fact that when it comes to church services, the country is still segregated in how it worships. Reza Aslan brought the conversation back to immigration again, admitting for the first time in public that “I spent ten years as an illegal immigrant in this country because the laws were so stacked against us.” He claimed that immigration laws are “so prohibitive… because of racism,” and said it’s likely Steve King’s “not the only racist in Congress.”