Bill Maher To Panel: What Does Romney’s Bullying Past Say About His Character Now? 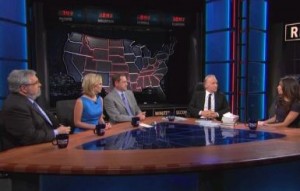 On tonight’s edition of Real Time, Bill Maher admitted he’s of two minds about the relevancy of Mitt Romney‘s bullying past in the 2012 presidential campaign. Obviously, he acknowledged that everyone has done stupid things in high school that, in most cases, they’ve come to regret. But Maher asked the panel if Romney bullying young gay peers in high school says something about his character and general outlook of people not like him.

Maher argued that it’s not just a matter of being stupid in high school, but “how you’re stupid” and what exactly you did that was stupid. He asked of Romney’s past behavior, “Isn’t there a pattern here about sort of being insensitive to weak, vulnerable people that continues to this day?” Margaret Hoover recounted a story of when one of Romney’s business partners had a daughter missing and Romney personally shut down the office and looked for her himself.

Maher and panelist David Cay Johnston rebutted this by saying that Romney is only compassionate as far as people who are “like him.” Maher dismissed the case as a rich white girl missing curfew, but Grover Norquist tried to argue that if President Obama did something similar, their would have been wall-to-wall media coverage of it, even on Maher’s own program.

Norquist noted Obama cut a federal school voucher program while sending his own children to a private school, trying to argue that Obama could just as easily be branded as the same kind of elitist snob. Maher shot this down by saying that the First Daughters deserve some level of security that going to a private school brings. Norquist agreed with that point, but said Obama should not have cut the option for children all over the country.

Johnston brought the conversation back to Romney’s bullying incident, pointing out that the presidential candidate’s best friend remembers the situation very well and that there is audio of Romney chuckling over the incident in question.