Bill O’Reilly: ‘Character Assassins’ At MSNBC, Who Abide By ‘If You Can’t Beat Them, Slime Them’ 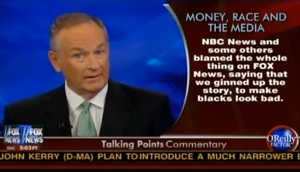 Among the many narratives that have come from the whole Shirley Sherrod saga, perhaps the most entertaining has been the resurrection of the bitter rivalry between Fox News and MSNBC. Keith Olbermann and Rachel Maddow have both launched vicious assaults for what they saw as FNC’s role in the Sherrod scandal, and last night, Bill O’Reilly fired back, saying of his rivals at NBC, “That’s why (the) character assassins do what they do. If you can’t beat them, slime them. “

O’Reilly was one of the first opinion media journalists to call for Sherrod to resign over her speech that has since been revealed to have been taken out of context, but then later apologized for getting it wrong. But while O’Reilly owned up to his part in this story, he took great exception to Maddow’s accusation that Fox News’ “scare white people” strategy, calling her a “loon.”

O’Reilly’s full court defense was in evidence as he referenced Washington Post columnist Howard Kurtz, who had quoted Fox News executive Michael Clemente‘s directive of “getting this story right.” It’s worth noting that on many previous occasions, O’Reilly has dismissed Kurtz as a “partisan hack,” but in this instance it appears that his work is to be trusted.

O’Reilly got very personal, though not calling out Olbermann or Maddow by name, instead going after NBC News chief Steve Capus, whom O’Reilly (and presumably other execs at Fox News) appears to hold most accountable.


Money, Race and The Media. That is the subject of this evening’s talking points.

The Shirley Sherrod Story is important on many levels. A week ago, few had ever heard of Ms. Sherrod, who worked at the Department of Agriculture. Now she this is the middle of a white house controversy. How did it all happen? Let’s run it down.

First there were accusations of racism directed at the Tea Party. The far left in America despises that movement. And could not wait to brand it as anti-black. Then, the NAACP piled on demanding that the Tea Party expel racists within their group. Then, a tape surfaces of Ms. Sherrod saying she denied a white farmer her full attention because of his race. Her remarks are were made to an NAACP group. and in light of the Tea Party business, they took on some urgency. Then, the tape was exposed as being out of context. What Ms. Sherrod was actually doing was trying to make a point that racism is bad. That was not clear in the beginning and people like me jumped to conclusions, the White House did that, the NAACP did that. That’s how explosive this entire race deal is right now.

So Ms. Sherrod got hosed and then the story took yet another turn. Let me introduce tout president of NBC Steve Capus. As you may know NBC news has become the most liberal TV news organization in history, thanks to its cable news arm. Mr. Capus has no problem allowing his personnel to wage dishonest personal attacks against pretty much anyone. A major violation of journalistic ethics. Well, after the Sherrod case has exposed, NBC along with some other far left enterprises blamed the whole thing on Fox News, saying that we ginned up the story to make blacks look back. One NBC loon said on the air that the ACORN, Black Panthers and Sherrod was designed to make white Americans scared of Black Americans. Who is sponsoring this stuff? Mad magazine?

But as it turned out, Fox Nws was actually cautious when the Sherrod story broke. In his Washington Post column today, Howard Kurtz report Michael Clemente ordered his troops to take things slowly. Quote:

“Let’s take our time and get the facts straight on this story. Can we get confirmation and comments from Sherrod before we go on air? Let’s make sure we get this right.”

Does that sound like a conspiracy to harm black Americans to you? So I assume Steve Capus will go on the Brian Williams broadcast and apologize to Fox News? We are looking forward to that. As I said last night, it was I who made the big mistake as far as Fox News is concerned. Me. I failed to read the entire transcript of Ms. Sherrod’s remarks, not good, no excuses, and I apologized yesterday to Ms. Sherrod. The bottom line is she deserves to be treated fairly by the media but so does Fox News.

NBC News is getting crushed by FNC. And that means they lose millions every quarter in revenue. That’s why Capus and his character assassins do what they do. if you can’t beat them, slime them.

And that’s the memo.