Bob Beckel Screams ‘F**k’ Live On Hannity, Refuses To Believe He Was On Air
video

Bob Beckel Screams ‘F**k’ Live On Hannity, Refuses To Believe He Was On Air 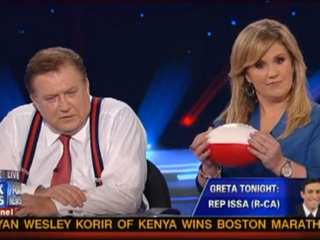 Bob Beckel didn’t realize when the commercial break ended during tonight’s final segment of Hannity, caught in a heated off-camera argument with fellow panelist Jennifer Stefano. Off-air debates, we thus learned, are granted a much more colorful range of vocabulary than on-air debates, and as the cameras started rolling, the first words on national television were, “You don’t know what the fuck you’re talking about.”

In a blooper that is as hilarious as it increasingly becomes painful, it slowly dawns on Beckel what actually happened, as Hannity insists he apologize and Beckel, after saying he won’t several times, finally realizes the cameras are actually rolling. When he finally figured it out, he told Hannity to “run your show better,” then covered his head in shame and refused to speak, other than to say “I’m going to be fired.”

Hannity explained the situation– the two were in a heated debate while he and Tea Party activist Neal Boortz played catch with the famed Hannity show football. Beckel didn’t look over at the producer giving a five-second warning and inadvertently went off on-screen. When he finally realized what happened, Beckel was beyond contrite, instead saying he was going to get fired and refusing to speak for the rest of the segment. Both Stefano and Boortz tried to comfort him– Stefano trying to continue the policy debate but noting that she took exception with the “personal” nature of debate sometimes, Boortz adding, “if they try to fire you, we’ll defend you.”

The perils of live TV: you can say something so inappropriate and refuse to believe you did for so long, that the unbelievable moment in which you realize what happened makes everyone come out looking more endearing.

Update: Mediaite spoke to Stefano, who confirmed to us that this was her first time on the panel with Beckel and that even before the program “I said, ‘he’s so charming, how can I yell at him?’ I find Bob to be charming, and who among us hasn’t done the same?” “Bob and I wanted to make sure Sean looked good,” she tells us jokingly, “since he had promised fireworks on the panel at the beginning of the show,” adding that “I am confident that, if Bob had realized we were live, he wouldn’t have said that… It is far from the end of the world. I’m from Philadelphia, you hear these things a lot.” She also noted that some open mic moments have been worse: “Compared to President Obama selling us off to Russia on a hot mic, Beckel came out well!”

The clip via Fox News (warning: NSFW language) below: