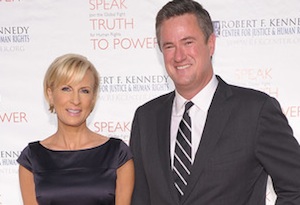 With the morning show landscape in flux, Mediaite has learned that another big move may be in the works, this one at CBS. Chris Licht, the well respected executive producer of MSNBC’s buzzy Morning Joe program is likely to announce that he is leaving the show to take the top spot on CBS’s struggling Early Show. While last we heard the deal was not finalized, our sources indicate it is “very close.”

But we are also told that CBS has a bigger prize in mind with that possible hire, wooing Joe Scarborough and Mika Brzezinski to come host that show when their contracts are up within the year. That would be an interesting albeit risky move since despite the incredible buzz that show gets among movers and shakers, its national audience is still puny even compared to CBS’ current programming. But at this point, it seems CBS will try anything to resuscitate that perennially third place and buzzless show.

This comes in the midst of a seismic shift at the national morning shows these days with Ann Curry preparing to take over for Meredith Vieira at Today, Natalie Morales taking over Ann’s job as newsreader and Mediaite has learned that NBC will announce (probably today) that Savannah Guthrie is taking over Morales’ old spot at 9 AM. This means that the network has passed over Amy Robach who has been a regular fixture in the 9am hour as well as the Saturday Today co-host. Over at ABC Josh Eliot began his new job as the newsreader at GMA and Lara Spencer will be co-hosting the 8 AM hour.

So would Morning Joe and Mika help change CBS fortunes? Maybe, but they would probably have to change the show significantly from its primarily insider political buzz to appeal to a broader audience. But in the end, CBS demonstrated that they could change the entire morning anchor team without really changing the ratings so they may decide that with a bold move like this, they really have nothing to lose.

When reached, a CBS spokesperson told Mediaite “As always we decline to comment on rumor and speculation. We have no announcement to make.”