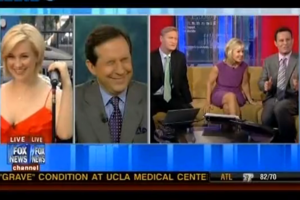 It was Friday morning, so let’s cut the boys of Fox & Friends some slack for being awkward. They must have known that getting fellow guests American Idol alum Kellie Picker and Fox News Sunday host Chris Wallace to talk about anything would be difficult, but it doesn’t seem any of them could have predicted the level of confusion and creepiness that would come of this duo, the segment concluding with Wallace predicting a “big price” to pay from his wife for the segment.

Host Brian Kilmeade took the first step to get them to interact, and right out of the stable misspoke, trying to get Pickler to say hello. “Will you do me a favor and offer your services to Chris Wallace?” It doesn’t seem that he realized he made a veiled prostitution reference– even though he kind of was offering this young girl’s “services” to Chris Wallace in exchange for his job– until co-hosts Gretchen Carlson and Steve Doocy started shouting out damage control, and Kilmeade, embarrassed, corrected himself: “Would you say hello to Chris Wallace?”

Pickler obliges, and asks how he is, to which Wallace replies:

“Well, I’m just great, Kellie. I must say, I’m better right now. Kellie, let me just ask you a question, and I want an honest answer because I’m a big American Idol fan and I saw you with sushi and all of that stuff when you were on the show. Do you have the faintest idea who I am?”

Good question. Hilariously creepy way to put it, but good nonetheless. Pickler takes the bait: “Oh yeah. Absolutely. I have your poster hanging above my bed,” she replies, which appears to be an ego-booster for Wallace, who straightens out his jacket proudly at the reply. “She remembers you from when you were in Menudo, Chris!” Doocy taunts from the background. At some point the exact nature of the sexual undertones of the conversation is lost– prostitution? cable news groupie-ism? whatever innuendo “Menudo” is supposed to be?– and, for the most part, are replaced by the humor of watching two people so vastly separated by age and interests try to establish a rapport in the rubble of the embarrassing context. But it’s enough to leave Wallace, who really didn’t ask for any of this, remorseful: “Unfortunately, I think [my wife] is [watching], and I’m going to pay a big price for this.”