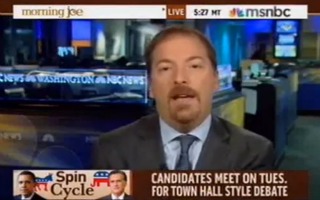 On Monday, NBC’s Chief White House correspondent Chuck Todd appeared on MSNBC’s Morning Joe where he was asked to weigh in on the state of the presidential race between President Barack Obama and Republican presidential nominee Mitt Romney. Todd said that Romney, still the underdog, has the chance to put the election away on Tuesday night with another powerful, lopsided debate performance. Obama can reverse the present trajectory of the race, in Todd’s opinion, by winning, or even simply not losing, the debate. But Todd glosses over just how difficult that task will be for Obama who has to appeal to two distinct voting blocs that expect differing and distinct performances from the president.

“What’s the thing that’s keeping [Mitt Romney] from closing the sale? Likeability, personal comfort, is he – he may not be one of us but does he understand us,” Todd said. “Well, of all the three debates, what’s the one where you interact with real people; this town hall debate. So, for Romney, this is the debate where he could win this election.”

“He could blow up the stereotype that he, you know, can’t interact with people – doesn’t have that sort of Bill Clinton gene in him where he knows exactly the right time to put an arm around somebody, the right time to connect with somebody,” Todd added. “It is more than just the president having to win this debate to stop the bleeding, to change things.”

Joe Scarborough brought the reality of Obama’s problems with the electorate (as opposed to Romney’s gains) back home to Todd noting that it was Obama who had a tough job to accomplish tomorrow night. Todd agreed, saying that he has been hesitant to hype the debate as essentially a make-or-break contest, but also cited polling data which should concern Democrats.

“In the private data that I’ve heard about over the last couple of days – the last 72 hours – plus what you are seeing, I feel like there has been a structural shift,” Todd said. “We’re no longer in this, ‘it’s even, but the president has these advantages.” Todd said that Obama’s structural advantages within the electorate (which one would have to assume would be head-to-heads on issues and on qualities like favorability) is gone. Todd said that if the president “doesn’t show up” he is not sure if Obama could reverse that damage in the last presidential debate.

Obama’s supporters were deeply disheartened by the president’s first debate performance. Clamoring for Republican blood, the liberal base rallied behind Vice President Joe Biden’s overbearing and not particularly statesmanlike debate against GOP vice presidential nominee Paul Ryan. But Obama cannot duplicate that performance or anything close to it without damaging his electoral prospects. President Obama, hamstrung by the town hall format which puts a premium on the tone and civility of the interaction between the two candidates, will have to be more deferential to his opponent than some partisan liberals would like.

Romney, having proven his debate prowess in the first contest, can afford to let the president throw most of the punches – so long as he effectively parries or doges the most damaging attacks. The pitfalls for the president in appearing too aggressive abound. Obama must appeal to the conflict-averse independents and undecided voters who populate that room, not to mention the viewing audience. If he is too polite, however, Obama may risk undoing the work Biden has done in reinvigorating the Democratic base.

If anyone is in a bind with something to prove, it is the president. He has a lot of work to do tomorrow night with with far more room for error than Romney. It is not Romney that can put this election away tomorrow, it is Obama. A strong first debate behind him, Romney is in a more advantageous position than Chuck Todd gives him credit for.