CNN’s Stelter Battles Trump Spox: ‘How Can We Believe What He’s Actually Saying?’ 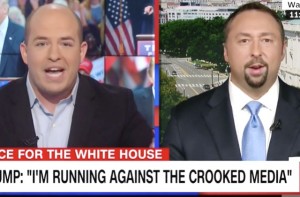 Miller spent the first part of the segment complaining about the New York Times report on internal campaign chaos––a report Trump has trashed––and going so far as to say, “I wish people would cancel their subscriptions to The New York Times.”

Stelter asked him if this isn’t just an example of a true story that’s just “painful to read.” Miller insisted the campaign is unified.

Stelter confronted Miller over the campaign’s media blacklist and whether it’s “undemocratic.” Miller insisted that they just have a problem with “biased ridiculous reporting” that they want to stand up to.

That is most evident in the “Media Bias of the Day” stories that the campaign sends out, which Stelter noted.

They ended up clashing over Trump using a chart from a “fringe right-wing website” with a bunch of nonsense on it. Stelter asked Miller who is giving Trump this information. (Trump has used very misleading stats in the past and does not seem to care.)

Stelter went through a whole laundry list of reasons why the Trump campaign might not have the best relationship with the truth and asked, “How can we believe what he’s actually saying?”

He warned about how “dangerous it is” that Trump is talking about rigged elections and cheating and all the rest of it.