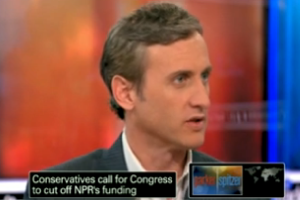 With the NPR/Juan Williams scandal in high gear and the latter donning war paint against his former employer for most of the week, the residual effects on both NPR and Williams’ career are the subject of much speculation. Mediaite founder Dan Abrams visited Parker/Spitzer to weigh in on the issue and argued that not only was this a great thing for Williams’ career, but simply a “really bad strategic move” on NPR’s part.

Attempting to get the speculation out of the way on the matter, Eliot Spitzer first asked Abrams to clarify the legal issues at hand: no, this is not a First Amendment issue– no one is being silenced, and NPR as an employer has a right to react the way they did. That does not make NPR’s decision to terminate Williams’ contract a smart one, however. In fact, Abrams argues that this does little to lift NPR’s reputation with those who are critical of their perceived left-wing slant. “This is a media entity,” he argues, “that for years has been dogged by allegations of being too liberal. So you would think that they would at least be particularly sensitive to making decisions that would allow them to be targets.” He also personally considered the termination an overreaction– “I don’t think it was that big a deal,” he tells the hosts– but did not fully defend the arguments on Williams’ part, either. “I don’t think it’s his strongest argument to say it was taken out of context,” he argued, considering the thought that Williams felt nervous when seeing Muslims in traditional garb on airplanes to be a thought independent of his main point.

Kathleen Parker, meanwhile, who expressed concern for the free flow of opinions in the marketplace of ideas, didn’t let Abrams escape without making him admit to his own feelings about Muslims on airplanes: “do you check out your fellow passengers when you’re getting on an airplane? What are you looking for?” To which Abrams responded with an astute point: “When I see someone in Muslim garb, I think, ‘this person can’t possibly be a terrorist!’… No matter what religion a terrorist is, they’re going to be wearing something to try to look like every other passenger.”

Last night’s discussion on Parker/Spitzer via CNN below: