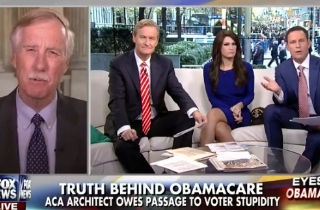 Video made the rounds yesterday of MIT professor Jonathan Gruber telling a University of Pennsylvania crowd in 2013 that voter ignorance helped get the Affordable Care Act passed because its authors were able to make sure the CBO did not score the insurance mandate as a tax. Gruber was a key figure in the bill’s formation, having directly aided congressional staffers during its drafting.

“Are you as outraged as most of America?” Fox’s Brian Kilmeade asked Sen. King after playing the video clip.

“I don’t know what he was talking about. I certainly don’t endorse those kind of comments,” the senator responded. “Everybody knew that there were going to be additional taxes required to support the premiums under the Affordable Care Act. I don’t see it as any deep dark conspiracy.”

An incredulous Kilmeade shot back: “Really? Senator, he said he wasn’t transparent. He wasn’t telling the truth.”

“Who was he?” King asked, throwing skepticism at Gruber’s role in the law’s creation. “I don’t know where he was in the process.”

After a little back-and-forth with Kilmeade and co-host Kimberly Guilfoyle, King scolded the pair. Transcript of the exchange below, via NewsBuster’s Mark Finkelstein:

KILMEADE: What does that have to do with it?

GUILFOYLE: But that doesn’t have anything to do with it.

KING: It does. It has to do with having insurance, man. If you don’t have insurance, it’s a high risk.

KILMEADE: They just lied about a health plan to the American people, called the stupidity of the American voter and bragged about the lack of transparency.

KING: Are you that cruel? That is what you’re saying.

GUILFOYLE: No we’re not.

GUILFOYLE: We’re just looking out for the facts and information.