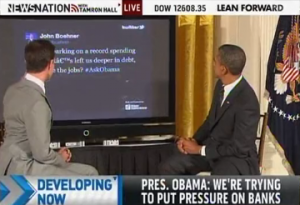 Hopefully we haven’t reached the point where the only way Speaker of the House John Boehner and President Obama communicate with one another is through Twitter. Today during Obama’s first ever “Twitter Town Hall Meeting,” one of the questions posed to the President came from the leader of the loyal opposition. Boehner launched a series of questions through his dual Twitter accounts (hey why does he have two?), and one of his less argumentative inquires was addressed.

The question picked had Boehner wondering:

“After embarking on a record spending binge that’s left us deeper in debt, where are the jobs? #AskObama”

Oddly the Twitter moderator blamed an awkward character in Boehner’s tweet on Boehner, yet it seems depending on one’s computer the Tweet actually seems to have been typo-free. Regardless, Obama was able to get in a crowd-pleasing dig, saying “John obviously needs to work on his typing skills” and the President then prepared himself to answer the “slightly skewed question.” Obama agreed “we have not seen fast enough job growth relative to the need” and continued with a long response, before concluding why jobs haven’t been created faster:

“We’ve been able to cooperate with Republicans on a range of these issues. There’s some areas where the Republicans have been more resistant in cooperating, even though I think most objective observers think it’s the right thing to do.”

In particular, Obama cited infrastructure jobs as an investment that Republicans should want to support funding for and he stated “eventually I’m sure the Speaker will see the light.” Yet maybe if @barackobama wants a guaranteed response, he should tweet his suggestion right back to @johnboehner?

“‘Where are the jobs?’ isn’t a ‘skewed question’ to the millions of Americans who lost jobs since President Obama’s failed ‘stimulus’ spending binge began. The President recently admitted that it failed to live up to the ‘shovel-ready’ promises, yet he’s still proposing even more Washington spending. That’s simply not the answer.”