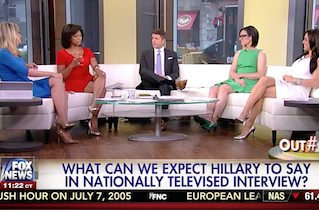 CNN’s Brianna Keilar scored the first televised interview with Hillary Clinton since the Democratic prohibitive frontrunner’s presidential announcement, and it is going to suuuuuuck.

Such was the verdict of Tuesday’s Outnumbered panel, which declared that tonight’s interview would be a “softball” with nothing but questions about “yoga poses” and “how does it feel to be a woman?”

“Short of sitting down with [MSNBC host] Chris Matthews I don’t know how much easier it’s gonna get for her,” guest host Brad Thor claimed. “You will not see CNN ask her: Can you name an accomplishment? Name one thing you did as a senator.”

“We know she is not going to ask the tough questions,” Thor added.

Sandra Smith pushed back a tad, with Harris Faulkner agreeing as Smith said the following: “Hold on a minute — I am going to play the other side of this. CNN knows they are going to get criticized if they don’t get tough in this.”

Harris Faulkner, for her part, said, “We don’t know that yet.”

Instead, Andrea Tantaros predicted it would be nothing but “awkward cackles.” “How many times do you think she goes ha-ha-ha?” Tantaros asked. Ha ha ha.