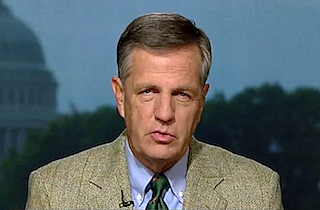 Following a short press conference in which House Speaker John Boehner (R-OH) once again called upon President Barack Obama to negotiate over a continuing resolution to fund the government, Fox anchor Brit Hume said the GOP was using calls to negotiate with Obama as a talking point that might work as a symbolic gesture, but did little to actually resolve the conflict over the government shutdown.

“He’s saying everything could be on the table if they sit down and talk, and all we’re asking is to talk,” Hume said. “Well, fine, once the talks start, then—We don’t know what his opening position would be, we don’t know where he would want to go with that. It just is clearly a talking point Republicans have decided helps them, to say, ‘We want to talk, they don’t.’ The average person hearing that says, ‘Gee, they ought to at least sit down and talk.’ So you see how a reasonable person would conclude that maybe it’s the president is being intransigent here, and that’s what doing this is all about.”

Hume also reminded host Bill Hemmer that for all conservatives find Obama recalcitrant, his own party often believes him too willing to give in to Republican demands.

“I hear all these accusations about how [Obama] gives nothing and so forth,” Hume said. “There’s a whole cadre of people on the left who think the president is President Cave-In. That he gives in too much, that he’s too willing to negotiate, that he offers Republicans too much. So that’s the politics he’s facing. In some ways, they’re a mirror image of each other.”