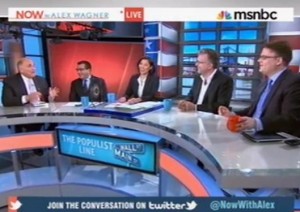 I don’t know what it is they’re putting in the coffee over at MSNBC’s Now with Alex Wagner, but I want some. On this afternoon’s show, a segment on the GOP and populism started out loose, with Wagner editorializing under her breath during a Rick Santorum clip, then went full-tilt nuts when Dylan Ratigan began doling out amped-up mini-rants on campaign finance and the financial system. The segment ended with Wagner, in the midst of her outro, laughing, “Nobody’s even listening to me.”

Also, for some reason, there was a gong.

At the top of the segment, Wagner can be heard whispering an exasperated “Jesus” underneath a clip of Rick Santorum saying “It’s a term I know that people use all the time, called middle class. As if there are classes in America.”

The hook for the segment, as Wagner introduced it (with a charming stumble), was whether the populist rhetoric of Republicans like Santorum and Newt Gingrich is resonating with GOP voters, with Wagner ticking off the candidates’ 99%-unfriendly credentials. “Gingrich is on the advisory board of leverage buy out firm Forstman Little. Perry received more than $7 million from private equity firms, private investment firms, and hedge funds, and Jon Huntsman, Sr., co-founded private equity company Huntsman Gay with former Bain Capital executive Robert Gay.”

However, panelist Dylan Ratigan quickly deployed his trusty “there’s no difference between the President and the Republicans,” citing the appointments of financial sector bigwigs Bill Daley and Jack Lew as White House Chiefs of Staff.

Martin Bashir then pivoted the conversation to campaign finance, by asking fellow panelist former Gov. Ed Rendell “How much money did you raise for your campaigns, Governor?”

That sent Ratigan into a (spot-on) rant about the “naive belief” that overturning Citizens United would eliminate the corrupting influence of money in politics. “You have to acknowledge the second issue, which is money in speech and the 77 issue with Buckley Valeo…”

“Dylan, you are getting deep.” Wagner said.

Ratigan’s off-the-chain enthusiasm issues, a key to his appeal, is often undercut by his unrealistic expectations, exemplified by his assertion that President Obama has no more claim to a populist message than Republicans do. “The suggestion that this (fake populism) is a right-wing issue or ‘Oh, my goodness look at the foolish Republicans, can you believe it?'”

“But his numbers are going up.” Wagner interjected

“And the President is a sensational manipulator of information, allows him to be an effective leader. But when you see the restoration of capitol requirements, it’s not that I do not think it, it’s an observable fact that there’s no exchange for swaps.”

So, because President Obama hasn’t been able to turn back the tide of a zillion-dollar financial market with the wave of Dodd/Frank’s magic wand, he’s exactly the same as the Republicans? To quote Michael Corleone, “Now who’s being naive, Kay?”

Gov. Rendell may have had the line of the day, though, proclaiming, “No one is more unabashed in their for love for Dylan than me, except, perhaps, for thousands of women.”

More to the point, though, he asked “If Dodd-Frank did nothing, why in God’s name are they fighting so hard to get rid of it?”

“Don’t you have to start, a journey of a thousand miles…” Wagner interjected, before the tail end of the segment devolved into an argument between Ratigan and Politico‘s Ben White, who pointed out that capital requirements are on the table.

Since its debut in November, I haven’t had many opportunities to catch my former White House colleague’s show, but if this crackling, funny panel segment is any indication, I’ll start making a point to.