Hannity And Malkin Defend Rutgers Coach: ‘My Father Hit Me With A Belt, And I Turned Out Okay’ 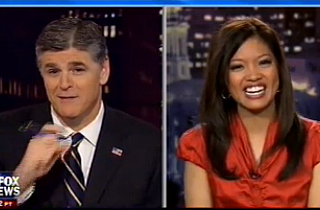 Last night on Hannity, the eponymous host and Michelle Malkin defended recently-fired Rutgers basketball coach Mike Rice for his occasionally abusive disciplining methods. The two staunch conservatives blamed the “politically correct left” for the entire controversy, noted that they are fans of “old-fashioned discipline,” and that they both received spankings as children and turned out just fine.

Rutgers fired the coach this week after an ESPN special video revealed that he had been kicking, shoving, and throwing basketballs at his players, in addition to calling them “fucking faggots” and “fairies.”

On his show last night, Hannity cautioned that perhaps Rice’s methods were just tough physical discipline meant to “get the best” out of his players.

“I’m watching [the video] and I’m thinking, ‘I don’t like it,’ but on the other hand, I kind of like old-fashioned discipline,” he said. “Have we become that politically incorrect? These are adults — if they don’t want to play for that team, they can leave.”

Malkin agreed with the Fox host: “Sports is a rough world,” she said before turning her focus on the “left-wing media” for making this a “conflagration” over “hate speech.”

“The problem isn’t so much that there are consequences for hate speech, and I think there should be” she explained, “The problem is that the left is so very, very, very selective about when it chooses to manufacture outrage and when it doesn’t.”

Hannity then likened the coach’s behavior to that of a military drill sergeant, asking, “Are we now going to fire drill sergeants because they get in the face of cadets? Is that next on the list of politically incorrect things we can’t do?”

“I certainly agree that political correctness has run amok,” Malkin responded. “I think there should be scrutiny of people who blow the whistle on these kinds of things.”

“I like the intensity. I like the drive. I like that he’s pushing those kids and he runs a tight ship,” Hannity remarked after conceding perhaps the coach shouldn’t have physically hit his players. “Maybe we need a little more discipline in society and maybe we don’t have to be a bunch of wimps for the rest of our lives.”

At the end of the segment, the two conservatives’ defense of Rice involved recalling their own experience with being disciplined as children. “My father hit me with a belt, and I turned out okay,” the Fox host recalled. “Except in the minds of liberals.”

“Same here. And with more than a belt,” she said. “I’m sure the left thinks we are warped minds.”

She then concluded: “I’m much better at administering spankings now than receiving them.”

Earlier in the day, Hannity’s Fox colleague Eric Bolling made a similar defense of Rice, lamenting that the coach had fallen victim to “the wussification of American men.”