Huckabee On Nancy Pelosi: ‘She Stuck Her Face In Barney Frank’s Wedding Punch Bowl Too Long’ 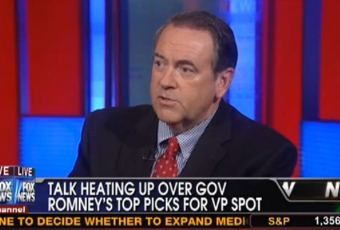 Following Mitt Romney’s mildly-received Wednesday speech before the NAACP, House Minority Leader Nancy Pelosi told Bloomberg TV that it was a “calculated move on his part to get booed” at the convention. On Friday’s edition of Fox News’ Your World former Arkansas Governor and current Fox host Mike Huckabee told host Neil Cavuto that Rep. Pelosi “stuck her face in Barney Frank‘s wedding punch bowl too long” to have come up with such an idea.

“Maybe that was behind the whole NAACP thing that, you know, Romney goes before them and conservatives look at him getting booed and are emboldened by that,” Cavuto suggested.

“I don’t buy Nancy Pelosi’s ridiculously absurd argument,” Huckabee said. “I think she stuck her face in Barney Frank’s wedding punch bowl too long to come up with a nutty idea that he did it on purpose, that he wanted to get booed. Nobody wants to go and get booed anywhere.” The Fox News weekend host was referring to Rep. Frank’s marriage to his long-time partner this past weekend.

“Although the governor did say to me, when I talked to him, that he expected that was probably going to happen,” Cavuto pushed back. “But you don’t think it was Machiavellian.”

“I don’t think he was saying, ‘Boy, I hope they boo me,'” Huckabee said, going on to defend Romney’s speech as “brilliant” and “the speech of his life” for doing what Huckabee has “always said to Republicans: quit making a different message when you speak to an African-American audience. Keep your message the same. They care about the same things you do.”