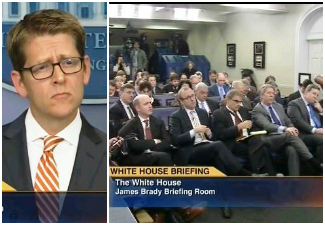 The members of the White House press corps exploded at White House Press Secretary Jay Carney on Thursday over the charge that President Barack Obama’s administration is too restrictive in the access it gives photographers, and replaces that access with official White House photographers.

Carney argued that he is “very sensitive” to the concerns of media photographers who do not believe they are having transparent access to the president in favor of the White House’s official photographer.

“Some of this has to do with fundamental transformations in the media,” Carney said. “We did not create the internet.”

At this point, the press corps burst into a flurry of aggressive questioning. American Urban Radio Networks reporter April Ryan accused the White House of going so far as to bar reporters from accessing the front of Air Force One during a recent presidential trip to South Africa in order to allow official photographers exclusive access to those images.

“The internet had nothing to do on Air Force One,” Ryan countered.

“Anyone here can tell you that there’s less access than under the Bush administration,” CNN White House Correspondent Brianna Keilar said. “President Obama who talked about transparency being the hallmark of his administration. So, isn’t it part of the problem that he set up a standard himself that he is not meeting?”

“In my experience as a reporter – now, I wasn’t a photographer – the answer to that is I complete reject it,” Carney replied.