Jim Acosta’s Press Briefing Challenge Was Not Journalism; It Was Activism
Opinion

Jim Acosta’s Press Briefing Challenge Was Not Journalism; It Was Activism 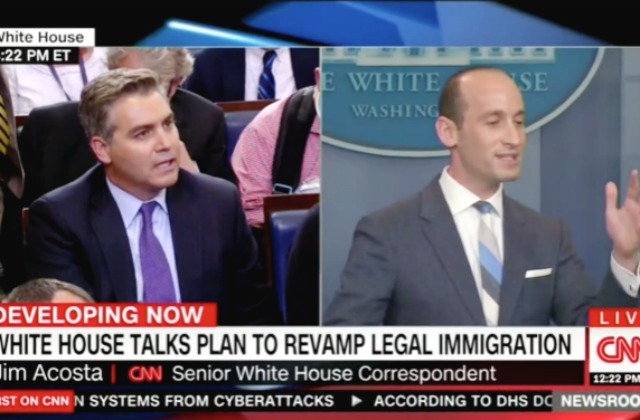 On Wednesday, President Trump and two Republican senators pushed a bill that is meant to curb legal immigration by installing a merit-based system. The Reforming American Immigration for a Strong Economy Act, or the RAISE Act, would give foreigners who are educated, speak English, and have high-paying job a greater advantage with their green card applications. And the goal is to slash the number of applications from 1 million to 500,000.

In other words, they want skilled workers that will strengthen the economy to get first dibs for green cards instead of uneducated, unskilled foreigners. And the people who have expressed outrage towards this bill don’t acknowledge that Canada has a similar merit-system and they haven’t criticized our neighbors to the north about it.

At the press briefing, White House advisor Stephen Miller took to the podium to answer questions regarding the RAISE Act. And while it was no surprise that the media finds this legislation dreadful based on their questions alone, it was CNN’s White House Correspondent Jim Acosta that took the gloves off.

Acosta started off by invoking the Statue of Liberty and quoting the famous poem that is read on the landmark:

“Give me your tired, your poor, your huddled masses yearning to breathe free.”

He accused the RAISE act of “not in keeping with American tradition” because according to him, they’re ““trying to change what it means to be an immigrant coming into this country.” Acosta specifically took offense to the requirement of foreigners to learn English before applying for a green card.

Miller responded by saying that learning English is required to become a naturalized citizen and dismissed the poem because it was “added later” and France gave the U.S. the State of Liberty as a symbol of our country’s freedom, not a symbol of a welcome mat.

After Acosta slammed Miller for his “national park revisionism,” Miller challenged Acosta as to how many people the U.S. should let in every year, citing that 300,000 were let in the country in 1970 and 500,000 in 1990. Even Acosta couldn’t answer what number violates the “Statue of Liberty law” he himself invoked.

The CNN correspondent then talked about his own father, who came to the U.S. from Cuba in 1962, and asked if this new policy would only allow people in from Britain and Australia because they speak English.

That led to this exchange:

MILLER: That you think only people from Great Britain or Australia would speak English is so insulting to millions of hardworking immigrants who do speak English from all over the world. Jim, have you honestly never met an immigrant from another country who speaks English outside of Great Britain and Australia? Is that your personal experience?

ACOSTA: Of course there are people who come in from other parts of the world.

MILLER: That’s not what you said and it shows your cosmopolitan bias.

ACOSTA: It just sounds like you’re trying to engineer the racial and ethnic flow of people into this country.

MILLER: That is one of the most outrageous, ignorant, insulting, and foolish things you’ve ever said… The notion that you think this is a racist bill is so wrong and so insulting-

ACOSTA: I never said it was a racist bill.

That wasn’t reporting; that was debating.

Acosta spent over five minutes bickering with Miller about this policy. He was insulted that foreigners would be forced to learn English, which is something that would only benefit them upon their arrival into the U.S. both in terms of employment and assimilation into our culture.

This isn’t the first time that Acosta has hijacked a press briefing.

Following that fiery press briefing, he called the new policy a “dog-whistle” and accused the White House of having an “unhealthy fixation” with Mexicans and Muslims.

Acosta denied calling the bill “racist” and technically he’s right. He didn’t literally say the words, “The RAISE Act is racist.” But between accusing the White House of “engineering the racial and ethnic flow” of immigrants, calling the policy a “dog whistle,” and asserting that the administration is obsessed with Mexicans and Muslims, he clearly thinks the RAISE Act is in fact racist.

And guess what, he has every right to think that it is racist. But that doesn’t make him a reporter. That makes him a pundit.

If Acosta wants to keep injecting himself into the news cycle, he shouldn’t call himself a reporter. When he looks at a mirror, he sees a “warrior” for the truth. In his mind, he has the moral compass of a saint and the bravery of a white knight. And the Trump presidency is some sort of dragon that he must slay one outburst at a time.

Also, he takes himself way too seriously.

There’s a reason why he kept throwing tantrums when the White House didn’t allow cameras during press briefings and it has nothing to do with the First Amendment; He needs the cameras. He thrives on the attention he gets and if the cameras are rolling, then he can go viral for his latest battle with the White House, which only elevates his profile. And of course Acosta was showered with praise on Wednesday by the left. After all, he’s a hero in their eyes. But without his soapbox, he’s nothing.

We all know that the Trump administration has a complicated relationship with the truth, but so does the media. Between the stories that get debunked, their collusion with the Clinton campaign that was exposed by WikiLeaks, and their neglect to report on things that make the left look bad (for example: the latest with Debbie Wasserman Schultz‘s IT staffer), there’s a reason why the media’s favorability is at an all-time low.

The media is doing a big disservice to the American people and to journalism as a whole by accepting what Acosta did on Tuesday as “journalism.” It wasn’t journalism at all; it was activism. He and countless others in the media now believe they have a moral duty to stand up against Donald Trump, the man they still can’t believe beat their preferred candidate Hillary Clinton in last year’s election. And in doing so, they’re willing to inject their personal views into their work and label it as “the truth.”

Such activism has been rubbing off on his colleagues. Glenn Thrush of The New York Times, Brian Karem of Playboy Magazine, and American Urban Radio Networks’ April Ryan have all editorialized their own line of questioning in the press briefings. Ryan was actually rewarded for it as she was hired as a CNN contributor after an altercation she had with then-Press Secretary Sean Spicer.

I’m relatively fresh to the world of political media, but if you have read my articles, particularly the ones that make Trump, Clinton, President Obama, or people within the Trump administration, conservative media, and liberal media look bad, I am able to report the facts without injecting my own views. That’s Journalism 101.

If the media embraces the Acosta method, the American people’s distrust in the media will continue to grow and President Trump will continue to take advantage of that distrust like he has been since Day One of his presidency. Using your opinion and calling it fact is as much “fake news” as actual fake news.

So I urge the media to do one thing: make journalism great again by preserving journalistic integrity.