Jon Stewart Lashes Out At Anti-9/11 Cross Atheists: ‘Why Do You Give A Sh*t?’ 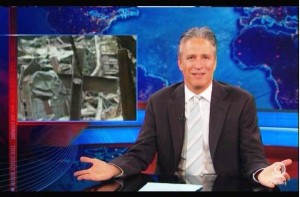 With the stock market plummeting today, the President turning 50 years old and that summer staple of Sharia Law fear looming dangerously in the news cycle, it was probably a good call on Jon Stewart‘s part to turn to the always comical “culture wars” for material today. And it delivered– sure, Lou Dobbs griped about Latino Spiderman and the Fox crew railed against contraceptives, but tonight, the atheists took the cake for opposing the display of the 9/11 cross at the New York memorial.

After giving President Obama a box of stock market nightmares for his birthday, Stewart reminded the audience that such an economic mess “shouldn’t let us forget that we all hate each other.” He turned then to Dobbs, who seemed perturbed by the rise of “Miles Morales,” the new, half-black half-Latino Spiderman. “It’s Lou Dobbs’ worst nightmare,” Stewart joked: “a Latino that can climb walls.”

He then turned to the contraceptive debate that has caught on like wildfire at Fox News, where many conservative analysts are complaining that the government shouldn’t force taxpayers to pay for other people’s contraceptives. Dana Perino made a particularly interesting point, asking why, if a woman could afford a Starbucks frappuccino, she should expect the government to buy her birth control. Stewart accepted the point, but “what if you can’t afford a $5 frappuccino and yet still have genitals?”

He finally turned to the last issue on the docket, the 9/11 Cross– a bit of metal found standing in the shape of a cross in the rubble of the World Trade Center, which is set to be exhibited at the memorial in New York. Atheists have begun to protest its exhibition on the grounds that it is offensive to their (non?) faith, a point Stewart didn’t understand. “By the way, atheists, why do you give a shit?” he asked, mocking the president of the American Association of Atheists for making “even those indifferent to our cause” hate them. Given that the atheist symbol was the atom, Stewart proposed replacing the cross in a way that would satisfy the devout and the heretic: instead of a cross made up of tiny atoms, an atom made up of tiny crosses.