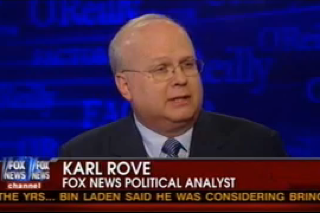 With the 2012 elections drawing ever nearer, Karl Rove has made his prediction official: no matter who wins the Republican primary, Barack Obama is losing. On last night’s O’Reilly Factor, host Juan Williams tried to remind Rove that the Republican field is weak, at best, but received only an earful as to why President Obama is a failure with no chance of winning another four years in the White House.

“The architect, the genius, the brain,” Williams introduced Rove before picking a bone with his latest column, suggesting that the outcome of the Republican primaries will have no impact on the certain loss of Barack Obama. Williams didn’t discount the possibility, but found the field weak on the right. “You need something to beat something,” he told Rove. Rove noted that the reason the President would lose was that his base had dismantled, including the percentage of people that approve of Obamacare, a statistic Williams called “deceptive because they include people who think there should be a public option.

Rove disagreed, adding that he could not see a scenario in which Obama could win because of his percentages against both real candidates and “Generic Republican.” “He is the President,” he argued, “he ought to have a bigger lead right now than he does.” He added that Mitt Romney was doing moderately well in the polls and that even Tim Pawlenty, who “not a heck of a lot of people know,” fared decently.